The Homer-Lockport Tea Party is going to screen a very special movie at 7PM on July 30. The film is titled “InJustice, The Film,” and is a documentary about “greed and corruption in American’s lawsuit industry.” 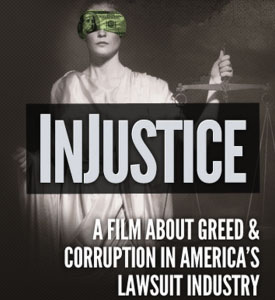 You can see more info at the InJustice website or at the Homer-Lockport Tea Party site.

The film will be introduced by WLS radio personality Dan Proft and will start at around 7PM on July 30 at 14326 Golden Oak Drive, Homer Glen, Illinois.

I had the pleasure of meeting the director of the film, Brian Kelly, when his film first came out and he had some interesting things to relate about the film.

Warner Todd Huston:: So I hear you’ve got an interesting movie coming out that we should have everybody find out about, you want to give me a synopsis of it?

Brian Kelly:: Well, the movie is called Injustice and it’s about corruption in the civil justice system as it relates to class action lawsuits. It is close to an emergency straight across the board. We tell the story of three main lawyers who were brilliant at one time. They all kind of have a reminder of being from John Grisham’s books but when we are finished with the film they are waiting to see if they’ll end up in jail. Dickkie Scruggs was one, who went to jail for attempting to bribe a US judge for instance.

This is a story about the most influential guys in the nation. Dickie Scruggs by the way, without a doubt one of the most influential trial attorneys in the United States over the last 15-20 years and you know he is one of top three at least among the top ten to be sent to jail. Think about it like this, if the three best national football players ended up in jail you’d be wondering what’s wrong with the NFL? You’d have to essentially give it all a closer look. And really that’s what we’re trying to do with this film.

Huston:: So would you consider yourself “conservative film maker”?

Kelly:: Not really, you know, I am just a story teller. I knew that this was a conservative issue, though.

Huston:: We really do have some major problems in our court systems and a lot of people are looking at things to try and reform it. You highlight the major problems with the class action here. That’s kind of one of the reasons why a lot of people are going for the idea of loser pays because it would prevent that kind of skirting of the actual court system in that whole idea of continually settling out of court to avoid the mess.

Kelly:: Right. But I am a filmmaker but not a political guy. What we wanted to do is get people thinking and get people talking about these issues. I think that is really what we set out to do but, you know, somebody else will make that decision of whether a reform of loser pays will happen.

Huston:: Did you get to a point toward the end of the film where you begin to talk about possible solutions or did you just — or is the film just focused on the problems and leave at that?

Kelly:: Of course, we are certainly hopeful that people do the right thing. You know, these lawyers are not doing right, you know, just as if people were robbing banks, just breaking the law. But some of these guys are doing the same thing in the name of the laws and racking in hundreds of millions of dollars doing it. And this has been going on for how long?

Huston:: Right. Now it seems to me like one of the biggest problems we have in the system is the concept of standing. Who has standing to bring a case to court? And I think if that was addressed, we might come closer to a solution and as you are saying, these class action guys are signing up millions of potential clients, without the clients even knowing they are in there.

Kelly:: One of the hard things is to fight the apathy of people and you tell them what’s happening and they go off thinking other things are worse. I think they’re kind of go “yeah, but you know that’s the way it is.” It really it does bother them but that’s just that statement that people make. You know, “you’ve got crooked lawyers and that’s what they do, so what do you expect?” And of course we know there are far more doing good than bad, but I think people’s experience with this that they remember the negatives and sort of feel there isn’t anything they can do.

Kelly:: It really is.

Huston:: You see it in politics all the time with people continually reelecting the same crooks over and over again.

Huston:: Some of them even ultimately end up in jail and everyone knows that they were crooks. So look at Illinois. Gov. Rod Blagojevich was the worst Governor ever when he got reelected when everyone we knew he was guilty. Then, before his second term even fairly began he was indicted and is now in jail.

Kelly:: Ha, yeah. It’s just hard to get through to people. They have lives to live, of course. So, that is why we did this film to try and give people a vision of just how bad it is and what’s going on. That way they can have some better ideas on what to do about it all.

Huston:: Well, very good. Thanks for taking a little bit of time with me and good luck on the film.