We are soon to be regaled by yet another movie from Hollyweird that likely misunderstands the difference between liberty (or freedom) and equality. This we might infer from the recently released advance plot synopsis for the upcoming movie Elysium from Director Neil Blomkamp, director of the surprise 2009 Sci Fi hit District 9. 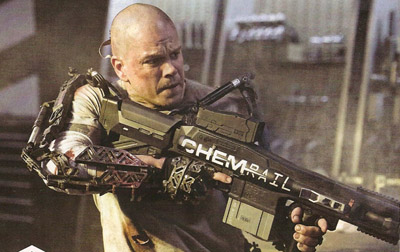 Blomkamp’s new film is set in the not-too-distant future where the human elite live in a cushy space station circling the Earth while the rest of humanity toils down on the environmentally distressed Earth. In this film, the hero (played by Matt Damon, who else?) will battle to, according to the synopsis, “bring equality to these polarized worlds.”

In the year 2159 two classes of people exist: the very wealthy who live on a pristine man-made space station called Elysium, and the rest, who live on an overpopulated, ruined Earth. Secretary Rhodes (Jodie Foster), a hard line government official, will stop at nothing to enforce anti-immigration laws and preserve the luxurious lifestyle of the citizens of Elysium. That doesn’t stop the people of Earth from trying to get in, by any means they can. When unlucky Max (Matt Damon) is backed into a corner, he agrees to take on a daunting mission that if successful will not only save his life, but could bring equality to these polarized worlds.

Sounds like a typical Sci Fi dystopian plot, right? Well, yes, if by typical you mean morally muddled and confused. In fact, it is the same sort of confusion we get from Hollywood Sci Fi all the time.

Hollywood’s confusion comes in over the question of which system should be most valued as the best one for the humanity. With these films it becomes woefully obvious that Hollyweirders are obsessed with “equality” more than they are freedom!

We have a film plot of contrasts here. It’s a common tale of the “rich” (always defined as evil, uncaring, and selfish) against the “poor” (always the noble, but downtrodden reg’lar folks like you and me). But notice the reason the hero is the good guy here. He’s going to “bring equality” to the two worlds, you see? So, let’s think about this idea, shall we?

The “two worlds” are separated for a reason. The “rich” are living in luxury on the space station but their “world” is tightly controlled as to who can come and go. Why is this? Because, of course, their resources — while amazingly wealthy — are finite. They have to carefully guard what they have or they will lose it if their riches are given equally to all of humanity.

So, what would “equality” mean to those on the space station should our intrepid hero “bring” it to them? It would mean that their quality of life will be heavily degraded for certain.

Some are prone to say, “Good. Them darned ol’ Rich creeps deserve to be laid low.”

But what of the teeming millions on Earth? What will bringing the space station elites down mean to them? Sure they will feel a momentary high of satisfaction that the evil rich dudes on the space station have been brought down, but the lives of the poor will only marginally improve if they improve at all once the resources of the space station are distributed. In the end, equality does not mean that all can be upgraded to space station status, but that all would living a life of the lowest, most affordable common denominator. Everyone will share in the misery as opposed to sharing much of the luxury.

It’s a socialist fantasy of “equality” we see here, not a tale of freedom.

Is equality better than liberty, though? What is the best model for human life? Does a better concept exist? Is there a better moral idea?

The better idea would be not to bring down the evil rich to the lowest common denominator of human existence but to find a way to give every human an equal shot at living that space station life — if only metaphorically. This is a world based on liberty.

In a world of liberty everyone has the chance to make it according to his best abilities. Does it mean some people will achieve more than others? Sure. It is simply impossible to imagine every one person can be as excellent as the next. Some will do better than others simply because we are not all equal mentally and/or physically. It’s a simple matter of fact. But with liberty we all have a chance to achieve what we can. Thomas Jefferson called it, a “natural aristocracy of men.”

Unfortunately, liberty is squashed by a top down imposition of “equality” which, by its very nature, prevents each of us from achieving to the heights of our individual abilities. We each can achieve our personal best only if we have the liberty to strive for it. And this means “equality” is not only not possible, but not wanted.

Director Blomkamps first major film, District 9, was pretty good. So, here’s hoping he won’t fall into the typical Hollywood trap of imagining that “equality” is better than liberty.