What Happened at the Illinois GOP Convention? Mostly Status Quo, But...

The Illinois Republican Party held its 2012 Party Convention this weekend. On the docket was addressing some asked for rules changes and picking a slate of delegates to the GOP national convention to nominate Mitt Romney to carry the Party’s banner in the upcoming presidential election. My ultimate analysis is that this was a status quo convention, but signs show that the status quo might not be too long for this world.

Two things first, here. One, I have to state up front that I intended to be a delegate from my district at the Illinois GOP convention. I registered as such and was accepted by my man Tim Schneider of the Hanover Republicans, but forces outside of politics (in other words, real life) prevented me from participating to the fullest extent. Regardless, I wanted to let you know of my intentions upfront so that you can see that I am not just a disinterested bystander in this deal.

Two, if you want a blow-by-blow account of the many great speeches, see Cal Skinner’s report at McHenry County Blog. I will mention a few things, but won’t do the speech-by-speech analysis. Skinner covered that very well so I don’t feel the need to cover that ground again. 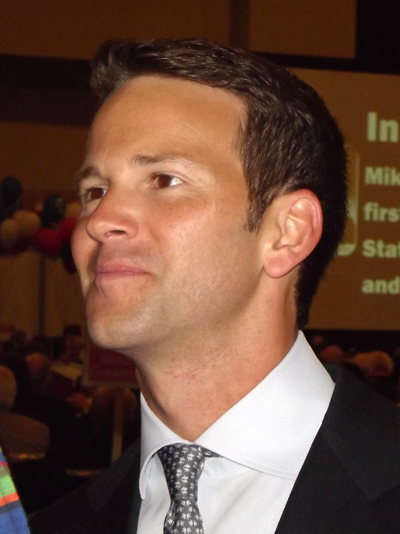 Rep. Aaron Schock plies the crowd after his address

Now, The single most controversial issue that was on the docket was the decision to initiate direct elections. For instance, there are many Republicans who want to change how the members of the State Central Committee are selected. Currently they are appointed by the committeemen but many voices in the party want to change that. They want these party leaders to stand for election (like the Democrats do, incidentally) instead of being appointed by the votes of the committeemen. This issue has been in debate throughout the state for several years already and I’ve covered that debate many times. (Check my out old coverage of SB600 using the search feature)

I am told that several attempts were made by various committeemen to get this issue its due during Friday’s Committee meetings. The issue failed in committee on Friday, but a spirited debate continued that afternoon, anyway.

Ultimately, DuPage County’s Dave Dieson attempted to get the direct elections issue brought to the convention floor on Saturday for discussion and a vote. Instead party leaders decided to allow a “yea” or “nay” vote on Saturday.

So, on Saturday, the call was made and the Chairman decided he heard more nos than yeses. This caused a lot of verbal reply from the crowd. As a bystander I have to say that the direct election voters were absolutely louder than the no voters. However, Party Chairman Brady insisted they’d counted the votes and the nos outweighed those that wanted direct elections.

According to Chairman Brady, it was roughly 580 opposed to the change with only 180 in favor. Like I said, when the results were read from the dais there were quite a few voices in opposition grumbling from the audience.

Status quo was the result, in any case.

In fact, from every action from the stage today it was obvious that dissenting voices didn’t make a dent in this year’s results.

Of course, the last state convention had an even more raucous nature.

One may recall the 2008 Illinois GOP convention when Ron Paul’s followers made it a very messy convention, indeed. Party big wigs were incensed at their behavior. This year a lot was done to make sure Paul’s raucous followers could not initiate that same level of disruption. But even though this year’s proceedings went on firmly under the control of Party leaders, there was still dissent voiced from all across the convention floor as results of committee meetings were announced.

For more proof of the status quo winning the day, just look at the names of the at large delegates to the national convention. Judy Topinka, Tom Cross, Jim Edgar, a Thompson, the only name that might be considered somewhat outside the status quo is Ron Gidwiz.

(Plus, why Topinka? She is nearly an invalid these days her health is so bad. Will she be healthy enough to make the national convention? I’d guess no is the answer to that.)

Still another note of vocal contention among the participants was during the announcement of who was to be the National GOP Committeepersons.

Let’s talk about before it got to Saturday first.

In the county chairmen’s committee meeting on Friday, Richard Williamson was afforded all the votes he needed to be appointed as the National Committeeman to the Republican National Convention (he got 15 while former State Sen. Steve Rauschenberger received 3). 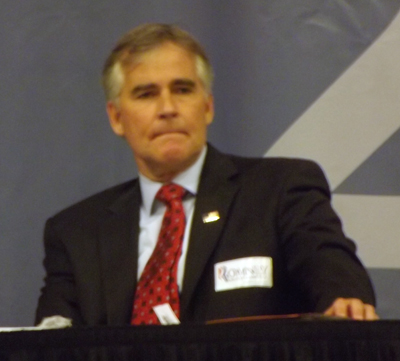 National GOP Committeewoman, though, was a closer affair. On Friday the vote went in favor of long-time GOP operative Demetra Demonte but not overwhelmingly. Demonte received 10 votes for the post, but Carol Smith Donovan garnered 8 while Kathy Salvi got 1.

By Saturday, when this was announced from the podium, a loud protest was heard from the floor. But as I said, every vote that was presented, introduced, seconded and accepted by the delegates met some hooting and hollering. It was happening so much that Chairman Brady was forced to address the matter saying that he appreciated all those that came, even those that disagreed. Like him or not, I think he did a pretty good job of quieting the dissent, at least by his actions on the dais if not his work behind the scenes.

While all this disagreement was a different animal from that of 2008 –the dissent in the 2008 convention was made up mostly of Ron Paul fans –this year it wasn’t only Paul fans that were getting a bit sick of the status quo. The county chairmen and committeemen did a pretty thorough job of keeping too many Ron Paul fans out of their delegations this year, yet there were still voices out there unhappy about the status quo.

Now, here is where I have a warning for the status quo, those Illinois GOP power brokers that are more interested in meekly accepting the crumbs from the Democrats table than in bringing this party to power. This convention was not just a workman-like example of muted status quo Republicans. There were a lot of voices, even from those that were chosen to speak, that presented a very conservative message.

One was Joe Walsh. 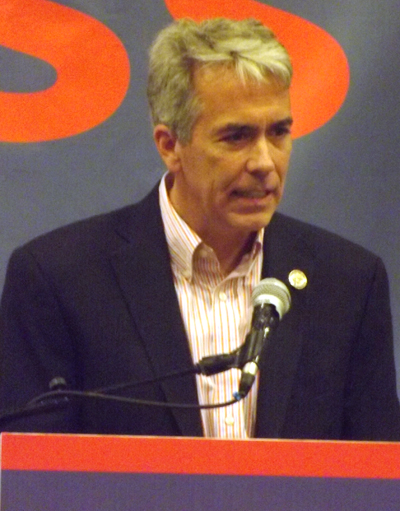 Joe Walsh proves my warning and also proves that the status quo could be on the wane. As Party chair Brady introduced Walsh to the floor he had to admit that the party itself did absolutely nothing to get Illinois’ most conservative Congressman elected and sent to Washington. He and the party missed the wave that brought Walsh to D.C. Brady promised that wouldn’t happen again, but the fact is the state GOP dismissed Walsh in 2008 just as they dismiss every conservative candidate. 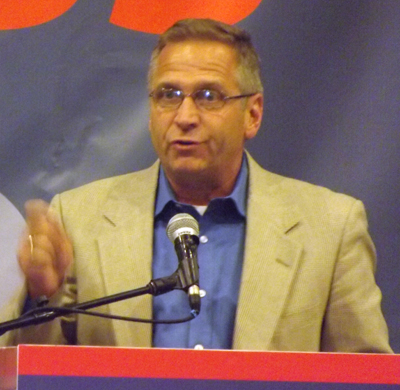 The two guys that got the most applause from those gathered were Mike Bost and Joe Walsh. You know Walsh, but you may need some help placing Mike Bost. He is the state rep who became an instant Youtube hit for screaming that “this is no democracy” when Madigan tried to push a faux “reform” package thru on a minutes notice in Springfield a week or so ago.

Bost was brought to the podium to a standing ovation.

(most of) Mike Bost’s address to the convention

Now both of these guys had an extremely conservative message and both were hardly the quite and retiring sort. Both got raving applause from the floor. Those in attendance crave the sort of bold action that these two men evinced. On top of that, the name of Wisconsin Governor Scott Walker was raised repeatedly. The question was asked several times, “where is Illinois’ Scott Walker?”

Joe Walsh’s address to the convention

Remember, those in attendance at this convention are not mere rank and file voters. They are the most hooked-in folks, those closest to the process. It is important to note the strong conservative vibe being given off by them. Because of this it is my opinion that this year showed some small cracks in the status quo’s power structure in the Illinois GOP. It is possible that their days are numbered. Maybe I’m starry eyed. But I feel it starting to congeal.

So, don’t fret, conservatives. Keep at it. Illinois is notorious for never seeming to get that the nation is going conservative. Hell, this state never even got on board with Ronald Reagan even though he was born here for cripes sakes! But these days, every Republican that was around in the 80s and 90s want to cling to his coat tails. Every Illinois Republican still around from those days want to be thought of as a Reagan man whether they were or not.

We need to keep pushing. Keep joining the process to influence the party. If it can be done in nearly communist Wisconsin, the birthplace of progressivism, it can be done here. We don’t have to be the but of jokes, people.

As Brady said in the video above, let’s “get ‘er done.” It may be despite him and his power elite, but let’s get it done regardless. 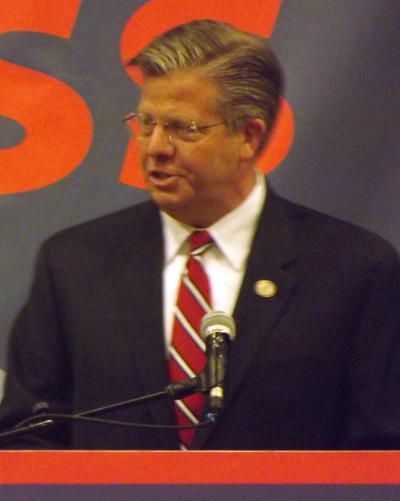 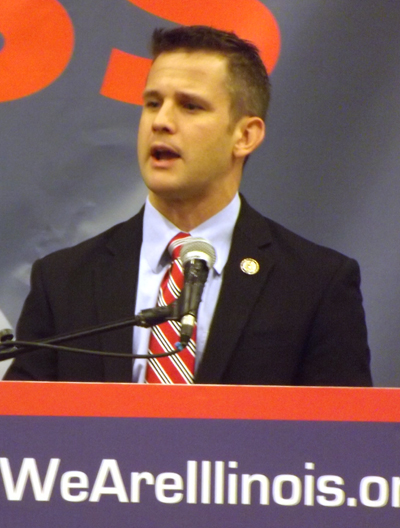 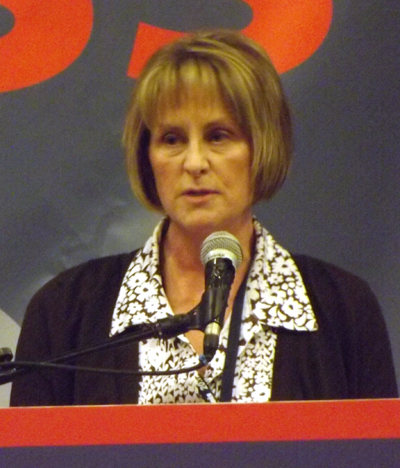 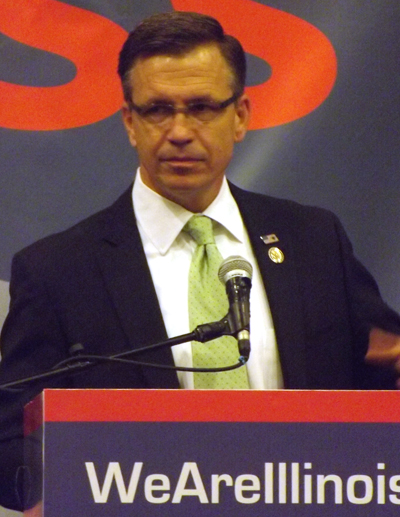 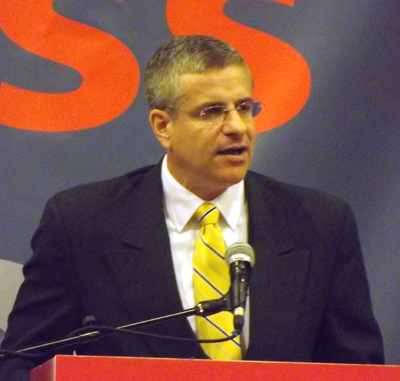 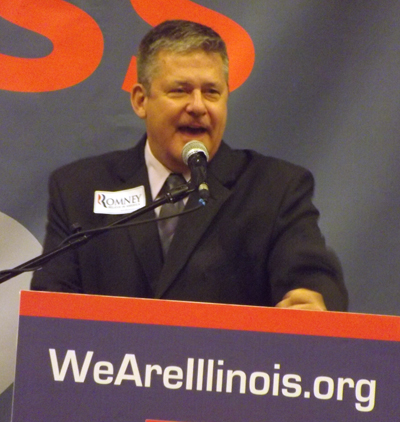 (Note: Apologies for my bleary-eyed goof. I had originally posted that Pat Brady became the GOP National Committeeman, but that was not what I meant. I wrote this late at night after the convention and just didn’t see my slip up. It was Mr. Richard Williamson that I meant, of course.)