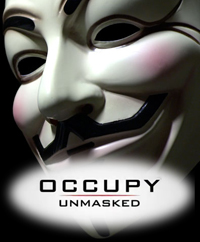 One of the things we were treated to at this year’s Right Online event, sponsored by Americans for Prosperity, was the world premiere of the documentary film Occupy Unmasked.

The one thing I can say about this film is it is absolutely intense. The amount of violence committed by the “Occupy” leftists is shocking when you see so much of it gathered into one visual presentation. But the behind the scenes lies and the smoke screen deployed to hide who is really behind the creation and launching of this so-called “movement” is just as shocking and this film documents both.

The film features Andrew Breitbart in the first of the two recent films he helped along and stars in (the other being Hating Breitbart — see preview HERE), films that ended up being the last two major projects he finished before he so regrettably passed from us. It is also a production of Citizens United.

Now, by intense, I really mean it. When the film was over I was almost fatigued by all the swirling images of the hate, the violence, the anti-Americanism and the lies from these leftists behind Occupy. It all washed over me like a wave of emotion during the film. In some ways it was over whelming.

But what we learn from this film is important. Sadly, we won’t find all this out any other way because the fact is the Old Media simply refuses to tell the truth about the fetid swamp we call the “Occupy movement.” In fact, not only does the Old Media refuse to fully inform everyone about who is really behind Occupy, they actually lie about Occupy, giving it cover. That is also detailed in the film.

One of the lies the liberal Old Media constantly disgorges about Occupy is that it is “the Left’s Tea Party,” or the left’s “answer” to the Tea Party. But the truth is that the comparison is more than just inapt, it is absurd.

The Tea Party came about spontaneously and rolled out like an avalanche picking up participants as it rolled along. There was no cadre of behind the scenes planners that purposefully created “the Tea Party” from scratch. The Tea Party is the first truly grassroots movement in American history.

Now, have big money donors come to various Tea Party events to help them along? Sure. But no big, deep pocketed conservative group is the Tea Party and no such group helped to create the movement. I know for a fact having been tangentially involved with such groups as Americans for Prosperity, the Heritage Foundation and Freedom Works, that all these big groups came to the TP after it rose, came late to the party, if you will, and struggled to join in and help early. They were taken by surprise by the vigor and importance of the Tea party. The Tea party is entirely decentralized, each chapter is separate and completely autonomous, and the 90th percentile of the people involved in these groups are funded solely by their own local members, not big money men like the Koch brothers.

This is nothing like Occupy. The Occupy events were planned by several behind the scenes groups that hate America and want it destroyed. They aren’t interested in “justice” or in helping the little guy. They just want the USA destroyed. They hoped that Occupy would help do that.

The good news is that they failed miserably.

At this point we all now know that the Occupy “movement” ended up being a joke and it is now dying with a whimper. Of course, the film didn’t get to that conclusion because it was finished last year before the real final word about Occupy was realized, but still the film is important as it chronicles the real creators of Occupy.

In any case, the real people behind Occupy hate this country. They hate everything about it and they want it in flames. They have no interest in political change within the U.S. system at all. They want everything about the U.S. eliminated.

That last is exactly why there is nothing similar between Occupy and the Tea Party. At its inception, Tea Party folks were most certainly upset over what was going on in the country — and this is the only thing that TPers share with Occupiers — but the TPers went to work within the system to bring the country back to its founding principles and have done an excellent job of starting down that path. Occupiers, on the other hand, have merely sat around beating on garbage cans, whining and complaining, indulging any manner of violence and criminal behavior, but otherwise doing precisely nothing to further their purported political goals… whatever the heck those are.

Occupy Unmasked is a necessary documentation of where the so-called Occupy movement came from, though. Everyone interested in the lies and subterfuge of the left should see this film.

If you would like to order this film HERE.