[Ed note: Ray Bradbury passed on last night. He was 91. In celebration of his life and work, I’ll repost this article that I wrote in August of 2010.] 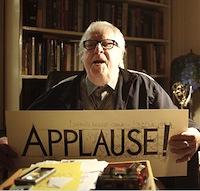 The L.A. Times has a heartwarming story of literary giant Ray Bradbury who at 90 is not afraid to tell everyone exactly what he thinks. A gathering of admirers got an earful of Bradburyisms on the verge of his Aug 22 90th birthday celebration in Los Angeles. Bradbury railed against the “too many machines” that we surround ourselves with, lamented that we hadn’t colonized the moon by now, and said that the U.S. is in need of a revolution because “there is too much government today.”

You have to hand it to this wizened sage. He hit the nail on the head with every statement. Bradbury is so right to point out that we are losing our American soul and character.

Here are his statements as reported by the Times:

Another of my favorite Bradbury quotes goes like this: “I don’t believe in colleges and universities. I believe in libraries.”

The man is clearly an individualist and not a collectivist.

Naturally the misinformed, and those unable to think clearly — by that I mean liberals — think that Bradbury is an old coot that is off his rocker. How can he say we should be going back to the moon but still be against “big government,” they fume. This is a simpleton’s point, the sort of idiotic, childish talking point that one would expect from halfwits like Keith Olbermann or Media Matters.

The unthinking lefties chastising Bradbury also focused on the seeming incongruity of a celebrated science fiction author being against the permeation of machines in our lives. How could he be against fantastic machines and be a sci fi writer they burble.

Clearly these people have never once read a Bradbury book. Sure Bradbury used the vehicle of science and sophisticated technology with his stories but his true intent was always aimed at exploring the human condition and arguing for the rights of the individual. If nothing else, Fahrenheit 451 fits this model. The tome warns the reader of a totalitarian state and presents the despotism as being disseminated by machines. Bradbury has for decades warned that man should beware of being dominated by his own creations, that man should be their master not their slave.

Like many authors and philosophers ruminating about the human animal, Bradbury laments man’s reluctance to explore the sublimity that is our existence and he decries our lack of interest as a species in the search for beauty. It is an ages old lament, one that the ancient Greek, Roman, and early Christian philosophers also explored. But in our hurry up world of Kindle readers, Internet connections, Facebook, and that horrid texting business, we too easily ignore the examined life that we should be leading.

And being so powerfully for old fashioned books while eschewing e-readers? How is it a sci fi guy can be so against e-readers? Let’s face it, there is something infinitely more pleasing about holding a book in your hands. There is something far more permanent about flipping a cover, turning a page, dog-earing that page then there is in holding an e-reading machine. The tactile feel of a book surpasses that of an e-reader for a sense of being. Lose a battery and you have nothing but a hunk of electronic junk with an e-reader. As time moves on e-readers will get out of date and its data will no longer be readable on other machines. But a book? Unlike an e-reader a book will be usable 100 years from now. It makes sense for a traditionalist like Bradbury to eschew e-readers. It should be unsurprising to anyone.

Now I am sorry for all those simpleminded lefties out there upset at Bradbury for his blunt and spot-on comments. I am sorry that they are not sophisticated enough to understand that the warnings of this aged elder statesman of the literary world are worth considering.

And I leave you unthinking lefties with Bradbury’s line above that is as cantankerous as it is amusing: “Prick up your ears and go to hell.”