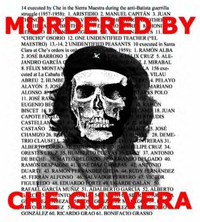 In a report on the recent Supreme Court decision reversing parts of Arizona’s immigration law, NBC’s Matt Taibbi gave extensive airtime to an activist for illegal immigration. The woman was shown sitting in a room prominently featuring a poster of Cuban communist, terrorist and murderer, Che Guevara, and among other activists wearing “Legalize Arizona” t-shirts. Yet, NBC labeled this woman a mere housewife and mother without noting her status as essentially a lobbyist against America’s immigration laws.

Taibbi sympathetically portrayed Mrs. Leticia Ramirez as “a mother” who just happens to have “been in this country illegally for over a decade,” and a woman just trying to be a good citizen.

Mrs. Ramirez, wearing an activist t-shirt that says “Arrest Arpaio, Not The People; End Police and ICE Collaboration,” said she is worried that the Supreme Court decision will cause fear in her illegal community.

It’s going to affect the whole community because they’re not going to be able to go out, have a normal life. They’re going to be afraid that if we go out they might – we might get stopped just for your color.

Of course, the fact is that laws governing immigration are supposed to do just that, make lawbreakers fear their status. Tougher laws are successful in making illegal entrants self deport. That is why they work.

Taibbi did include a few words from what he calls “supporters of 1070,” granted, but the fact is he labels them as such while he never says a word about the activism of Mrs. Leticia Ramirez. She is presented as a suffering mother and wife, not the activist she is.

So an activist fighting to be allowed to break our laws is given the benign label of “mother” and “wife” while those hoping to strengthen our laws are labeled as “supporters” of a crack down that hurts poor mothers, children, and widows everywhere.