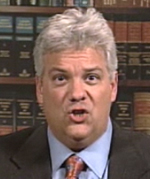 Blogger Cal Skinner of McHenry County Blog is under attack by another anti-free speech Democrat — not that any Democrat is pro-free speech, of course. Democrat State Rep Jack Franks has sent Mr. Skinner a threatening letter essentially telling him to stop writing about him, or else.

Now, Democrat Franks wants us to feel sorry for him as any reading of his threatening letter can see. In his letter Democrat Franks is pretending that blogger Skinner is trying to post images of his family and invading their privacy. Democrat Franks also claims that Skinner is “not credentialed” as a “journalist” so he shouldn’t be allowed to write criticism of the public official.

First of all, Cal Skinner has never posted any photo of Jack Franks that wasn’t obtained during a public event and Skinner has no interest in Jackie boy’s family — just about Franks’ public policy decisions as a State Rep. Secondly, legal case after legal case all across this great land is coming down in favor of bloggers. So, Franks’ attempt to shut a blogger up is running counter to American right of free political speech, not just in the spirit of the First Amendment (that part of the Constitution that Democrats hate with a passion) but even counter to emerging law concerning the status of bloggers that is being set all across the country.

But Democrats hate, hate, hate being dogged by Internet journalists. Democrats just aren’t used to seeing bad press, after all. I mean, the so-called “real journalists” out there never write a bad word about them, so it’s no surprise that Democrats get alarmed when conservative bloggers begin to write about them in a critical manner.

In fact, nearly every single lawsuit that has been brought by a public official in the various cases across the country have been brought by Democrats seeking to shut down conservative leaning bloggers. Democrats have been trying desperately to use the force of law or the threat of expensive lawsuits (like Franks did here) to shut down opposition.

One of Skinner’s pet peeves was Jack Franks’ bill that he wrote to allow electric provider Commonwealth Edison to chop down any tree it wanted that surrounded its power lines. This law allows ComEd to chop down trees without the permission of the owners of those trees.

I can attest to the facts about this law, myself. Just last month ComEd came onto my property, sent its tree destroyers into my completely fenced in backyard, and viciously removed every tree running alongside the northern edge of my property. ComEd started this work at 8AM one morning and neither informed me ahead of time nor asked permission to enter my property in the doing of their destruction. Now all the privacy bushes and trees that were between my property and the next house are gone.

Jack Franks is the man that gave ComEd the permission to violate the sanctity of my property.

So, not only is Jack Franks against the Constitutional rights of free political speech, he is also against the sanctity of private property rights.

Sadly, the useless Republican Party leaders of McHenry County are so in love with anti-free speech Jack Franks that they won’t even try to find a Republican to run against him and purposefully torpedo any candidate that tries it.

Jack Franks and his table-crumb-begging Republican pals in McHenry County are exactly why Illinois is the single worst state in nearly every category of growth, freedom, and economic health in the nation.