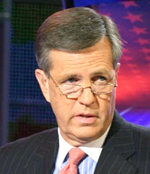 You can’t call Fox News Commentator and Senior Political Analyst Britt Hume a shill for the Republican Party, especially after slapping the Republicans for having a brand name that is in “terrible shape” on the June 24 episode of Fox News Sunday with Chris Wallace. Even after the bad several weeks the Democrats have had, Hume still felt the need to kick the legs out from under the Republicans.

Not only did Hume smack around the Republicans for their bad PR but he also warned that the GOP could suffer some backlash, or end up in “overreach,” with the Fast and Furious investigation.

No wonder Republicans can’t get ahead when even Britt Hume won’t give them credit where it is due while scolding them despite how badly Democrats have been doing of late.

The Republican brand name is in terrible shape, and people are not naturally sympathetic to the Republicans in Congress. They’re not, they’re really not naturally sympathetic to the Congress as an institution, but certainly not to the Republicans. So any time Republicans do anything big or bold, they run the risk of people not liking it just because it’s them doing it. I mean, look, they fought like cornered rats to try to get some spending restraint attached to an increase in the debt ceiling and came out looking terrible for trying to do what I think, if you step back and take a look at it, it’s kind of the thing they promised to do but even among the people that support them they didn’t come out looking good. So, sure they’re risks, you bet they’re risks.

Can’t win for losing with Mr. Hume this weekend!

Of course there are a few problems with what Mr. Hume said.

Taking the last first, the GOP did not exactly do what they promised to do during the debt ceiling debate initially. After newly taking office, many 2010 GOP House freshman promised to pursue spending cuts while refusing to raise the debt Ceiling. GOP leadership, though did settle on the policy of demanding spending cuts tied to that raise in the debt ceiling regardless of what those freshmen promised to their constituents. So, the initial record is mixed precisely because the leadership was split with many of the freshman newcomers.

Ultimately, though, the House voted against raising the debt ceiling. But, even so, the GOP deserves credit for getting some spending restraint imposed on Washington, or at the very least actually succeeding in turning the conversation towards real cuts. After all, as House Deputy Majority Whip Peter Roskam (R, IL) is fond of saying, after the 2010 election, Washington began to talk about actual cuts in spending for the first time in decades.

“The entire conversation has changed in Washington,” Roskam told me in a 2011 interview. “No longer are we talking about how to get more money into programs. Now the whole conversation is how much do we save and the House Republicans are driving that discussion.”

It really is a shame that Hume did not give the GOP some credit for beginning to start changing the culture in the halls of Congress.

From rumors of divisive Democrat Party Chairwomen Debbie Wasserman Schultz about to be fired due to her complete failure as a the Party Chair, to the mess in North Carolina where the Democrats decided to hold their national convention — troubles so bad many Democrats are even going to skip the convention — to the news of a once up-and-coming black Democrat switching to the Republican Party, the news for the Democrats as been very bad of late.

This isn’t even to mention the mess that is Fast & Furious and Obama’s disastrous June 8 comment that “the private sector is doing fine” quite despite a stagnant economy, chronic high unemployment, and an investment sector scared to death of Democrat interference via regulations and other economic meddling.

Yet, instead of noting all that, Hume decided to sucker punch the GOP.

On the other hand, there is something to be said about not being so high on the Republicans that you ignore reality and some of what Hume said is exactly right in that many people really do look askance at the Grand Old Party quite despite how badly Democrats are doing.

In his recent comments at Right Online 2012 held in Las Vegas, Nevada — an event sponsored by Americans for Prosperity — pollster Scott Rasmussen warned his conservative audience that the GOP should not assume that just because the Democrats are looking so bad and are so little trusted these days that voters are comfortably turning to the Republican Party as the repository of both their votes and trust.

Rasmussen said that his polling experience has told him that public opinion is just not necessarily in favor of Republicans. Rasmussen did tell his audience that the American public is generally with Republican ideas of cutting spending. Still, that does not necessarily mean that the public is all fired up about the party that most espouses those aims.

Rasmussen said that in his experience Americans are not swayed by talk of “limited government.” They do, however, innately understand that the way things are going now simply cannot continue. “People are pragmatic,” he said. He then claimed that people want to hear and see results, not high rhetoric.

He did say that he was optimistic that the American people have the good sense to do what is right and what is needed to solve this economic problem. He also felt Americans still believe in our chief principles.

Rasmussen said that 81 percent of Americans still believe in the Declaration of Independence and its principles that we are all endowed by our creator with the inalienable rights of life, liberty and the pursuit of happiness. He said 77 percent believe the free market is better than government management and he said 6 out of 10 think that when we live up to our ideals we are the last, best hope for mankind.

So, while it wasn’t the fairest way to note that the GOP still has a lot of work to do to get voters on their Party bandwagon, Hume was right in a way. The GOP cannot simply expect to get votes merely because the Democrats are having so many bad weeks.

It’s just too bad that Hume seemed to give the Democrats such a huge a pass.