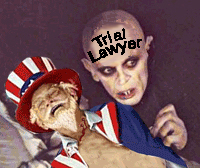 Democrats and left-wing activists have lately been pushing the idea of “equal pay” for women in an attempt to find some issue that would take attention away from the horrible economic record of the Obama administration as the campaign for the White House heats up. But who really benefits from this push? Trial lawyers, of course.

This week the Democrats tried to float the “Paycheck Fairness Act,” but it failed in the Senate in a 52-47 vote.

So what would this act do? As Andrew Stiles reports:

The “Paycheck Fairness Act” would have established unlimited punitive damage claims in class action lawsuits filed against employers in instances of alleged gender discrimination. The chief beneficiaries of the bill, experts told the Washington Free Beacon, would not have been female workers but the lawyers and law firms that would litigate the lucrative lawsuits made possible by its passage.

Naturally trial lawyers have given more than $230 million to federal political candidates with the largest amount going to Democrats — $132 million to Senate democrats alone.

As Stiles notes, Republicans opposed this bill because there is already a glut of frivolous lawsuits in this area of law and the result of passage of the act would only make that worse.

“The only winners under this legislation would be trial lawyers,” said Sen. Dean Heller (R., Nev.) before the vote on Tuesday morning. “Legitimate cases that could be addressed under the current system would be lost in a flood of lawsuits.”

The work in Congress is about through for the year, of course, so the idea that this bill could have become law this year is laughable. In fact, Republicans charge that the introduction of this failed act was a purely political move in the first place, that Democrats knew it would never pass.

There is also the matter of the hypocrisy of the whole thing. With Democrats offering themselves as the champion of lower paid women, it is interesting to note that they aren’t paying women on parity with men themselves.

While they claim to be on the side of those poor women, Democrats in Congress and Obama’s White House appear to be just as guilty of paying women less than men.

Regardless, this equal pay act is more like a higher payout to lawyers act.