Well, Friday evening, June 8, 2012, we marked the end of the first CPAC event held in Chicago and what a great event it was. The triumph in Wisconsin was on everyone’s mind but so was Obama’s dismal record. Not just dismal, but according to several speakers, even dangerous. The economy and the election of Romney were focal points but so was foreign policy this day. One theme, though, was constant: Obama has to go.

The event was a great success with well over 2,000 participants, all seats filled for the most part during the speeches and some great groups like the United Republican Fund, the Illinois Policy Institute, the Heartland Institute, Champion News, and others hosting and participating.

I’ll say a few words about the speakers I did see in the order I saw them and I’ll do this in a few installments so that this won’t be one long, overly taxing post. Now, as each of these speakers appeared before us I live Tweeted their comments, so the following quotes are pulled from my Twitter feed.

But before I do that, each speaker was quite enthusiastic over the win of Governor Scott Walker who defeated an effort by the far left and their union overlords to recall him in Wisconsin. Each speaker praised Walker and crowed about the left’s loss in there. I won’t regurgitate the Wisconsin hunk of each speaker as they were pretty much all the same; exuberant. The essential point was that we are all cheeseheads now. 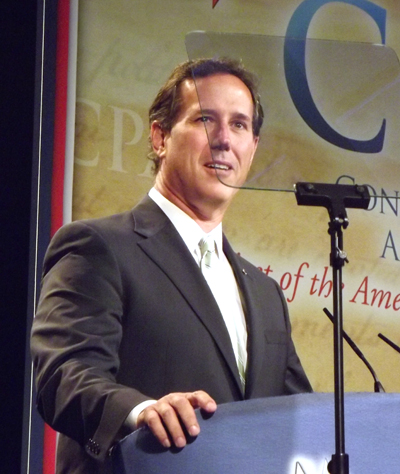 Rick Santorum on the main stage

Former Pennsylvania Senator and recent GOP Presidential candidate Rick Santorum gave one of his well-crafted, typically workman-like speeches. One of Santorum’s early points was that America is at a “tipping point” and we’d better be there to tip it in the right direction.

Santorum said that the “role of who is the master and who is the servant has changed with the increase in the power of government,” and this election could reverse that trend.

As is his wont, Santorum’s speech took a turn toward the religious when he reminded the audience that our rights come from God, not men, and that without the principles of the Declaration of Independence and its concepts that God is the granter of rights, the Constitution can become a “dangerous document.”

Santorum also reminded us that America is a place where immigrants come to become something: American. “People come to America to be Americans but they don’t go to France to be French or China to be Chinese,” he said.

Like many speakers to come, Santorum said that this election was one of the most important in our lifetime and hoped that we could all be proud that we were there and did “everything we can to save America.” 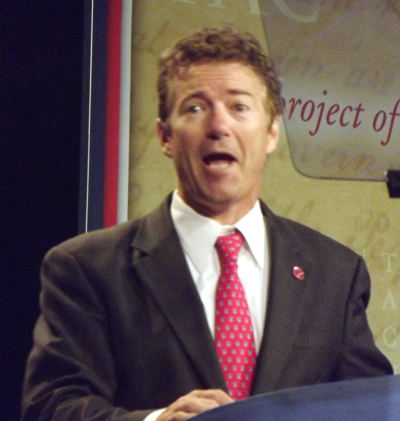 Kentucky Senator Paul, son of presidential candidate Ron Paul, focused more on the economy. He warned that President Obama is failing. “The great speech maker in chief has no plan to take on entitlements,” he scoffed.

Obama’s party is doing no better, Paul said. “The Democrats only plan on entitlements is to show Republicans pushing grandma off a cliff.”

“The Democrats have offered nothing,” he went on. “How do you compromise with a party that doesn’t even show up? The Democrats refuse to even follow the law and pass a budget. We’ve offered many of them.”

Senator Paul wrapped up asking, “Will we rise to the occasion to again believe in the greatness of our founding ideas? I will reply that no man and no government can take my freedom. My freedom comes from my creator. ” 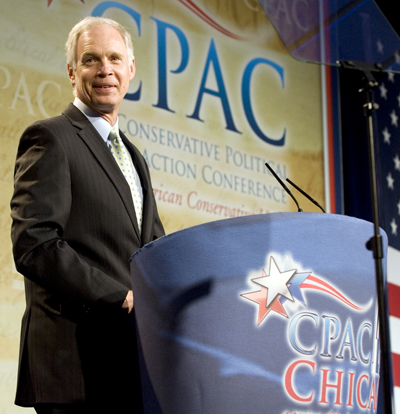 First term Senator Johnson began the meat of his speech slamming the Democrats who he says don’t understand how the economy works. “The main thing we (Congress) have to do is get out of the way of this economy and it will grow,” he assured the crowd.

But the Democrats don’t get it. “If all you know is government you’ll look to government as a solution. If you don’t know business you won’t respect it.”

The problem isn’t merely Democrats, though, Johnson said. “The problem we face in this country is far too many were never taught the foundations and premise of this nation.”

Some in Washington have told him that money is a problem, too. They complain that political donations are getting harder to raise. “They tell me in Washington, ‘our donors are tapped out.’ I say, ‘tough.'”

Finally, while the American spirit is alive, Johnson says, we are in a fight for its very existence. “This is a fight for our fundamental freedoms,” he warned.