A new Twitter-based fundraising tool debuts today and the new service already has the two biggest names in the Politics biz signed up as clients: Barack Obama and Mitt Romney. Chirpify begins at the top of the heap client-wise as it not only has teams Obama and Romney signed up as clients but it also has some 25 House and Senate candidates. 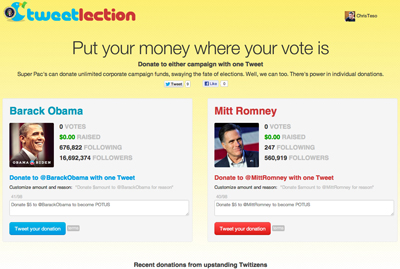 The new Twitter-based fundraising tool will incorporate Paypal into its payment system and will feature an easy, one-click interface that will make it easy to donate to political candidates, non-profit organizations, and presumably anyone that signs up to use the service. It’s seems to be a very easy transaction for the donor, too.

We all know that politicians and candidates are using Twitter more than ever. But what many wondered is what the social networking tool could do for the campaign’s bottom line?

“Engagement is not the problem for politicians on Twitter, what is an issue is turning that interaction into donations,” said Digital Acumen CEO and Founder Andrew Hemingway. “Either potential donors get sidetracked when following a donation link from Twitter or politicians need a computer science degree to set up an online donation platform. Chirpify provides a simple solution by processing donations without ever having to leave Twitter.”

Donors must sign up for a Chirpify account, of course, so that their Paypal account information can be accessed, but once that is done the donor can donate to any person or group using Chirpify with a single tweet, never having to leave Twitter at all to make the donation.

Once an account is set up a donor just has to tweet that they wish to make a donation and it all goes through automatically. For instance, Team Romney will tweet something like “Donate $25 to @MittRomney via @chirpify”. If a Twitter user then wants to donate to Mitt Romney, he will simply reply “@MittRomney donate” and the transaction will be automatically carried out. (Download a .pdf of a flier explaining Chirpify HERE)

It’s all pretty easy and might make donating to politicians and groups quite a bit easier.

“There are hundreds of millions of dollars being raised for U.S. political campaigns every year, and an estimated 140 million Twitter users,” said Chirpify CEO and Founder Chris Teso. “Yet until now there was no way to directly exchange currency on Twitter. It is a no brainer to introduce Twitter Fundraising for Politicians.”

The only thing this won’t do is be able to catch an impulse donation as the Twitter user does have to go through the motions of signing up for a Chirpify account. No one can use Chirpify on the spur of the moment, for sure. But this will make it easier for Twitter users that already have a desire — and perhaps a history — of donating to things to be able to do so through the social media platform.

Plus it will, as mentioned above, finally create a way to monetize your Twitter account, something that is quite new.

Finally, here is the company’s info for you. According to the advance publicity kit, Chirpify…

…is a seamless payment system for Twitter commerce. With full integration to PayPal, Chirpify enables businesses, politicians and non-profits to buy, sell, donate and exchange funds on Twitter, turning tweets into immediate transactions. Based in Portland, Oregon, the Chirpify platform is the first social commerce system to offer direct monetization through Twitter. To learn more about Chirpify and begin sending or receiving payments today, visit www.chirpify.com.

So, is this a leap forward in making Twitter something more than just a momentary Internet phenomenon and something that will help it become more useful for business purposes? It just might.

We’ll be watching Chirpify but with the high-powered clients it has already signed up, I think it is coming out of the gate pretty strong.