BS Meter Special: Michelle Says We are 'Blessed' To Have Barrack 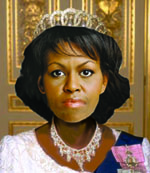 It is perfectly natural for a wife to be proud of her husband in those situations where such praise is warranted. In Michelle Obama’s case, well, we can certainly agree that his great success is something she can be proud of. But, pride does not excuse idiotic hyperbole and that is what she gave us on May first.

In fact, Michelle indulged not just hyperbole, but outright lies in that she tried to convince her audience that Barrack “knows” what its like to be poor.

You see, those are the experiences that have made him the man and the President he is today. And we are blessed to have him.

Praise the Lawd, we have her man as our blessing from on high.

But, wait. How is it that “Barack knows” these things? How does he know these things? He doesn’t really because he’s never experienced any of the privations that Michelle alludes to.

Now, I am certain that he can employ common logic and can have sympathy with the poor and downtrodden. But he doesn’t know their travails in the same way that Michelle meant it.

Obama grew up in a family of well-educated people. Even his grandparents had college degrees. His mother did, his father did and from Harvard, yet. Then he was placed in the care of a grandmother in Hawaii that was much better off financially than the average Hawaiian. Then he also was given all the cash he needed to get through college (by beneficiaries that we still don’t know) one of them being Harvard. Then he got married to a woman that ended up making over $300,000 a year, lived in a ritzy part of Chicago and had the free time to run for political office without having to work for a living himself.

The truth is, Barrack Obama has never known poverty, want, need, he’s never had the fear of not knowing where his next meal will come from or what his future held.

Michelle is simply full of crap, here! Obama does not know the things Michelle claimed he knew. He just doesn’t.