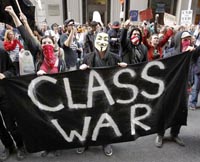 In another story that should surprise no one, the Cleveland Plain Dealer reveals that the name of one of the Ohio bridge bombers nabbed by the FBI is so closely involved with Occupy Cleveland that his name appears on the lease of the rented warehouse they use for a headquarters. Instead of being ashamed, though, the Occupiers are mad at the FBI, apparently.

When stories about the late April arrest of five Ohio men who had formed a plot to bomb some key bridges in Ohio first surfaced, the Old Media called them merely “anarchists.”

It wasn’t long, though, before the New Media began to find out that they weren’t just any amorphous “anarchists,” but members of the Occupy Wall Street movement in Cleveland (Occupy Cleveland). No Old Media outlets reported this in the beginning despite how easy it was to find the facts.

OWSers initially denied this claim saying it was just a smear job on them but now the newspaper in Cleveland finds that one of the accused, Anthony Hayne, 35, signed the lease of the building the Occupiers use for an HQ.

No denying it now, eh OWSers?

The reaction of the OWSers, though, needs to be examined. The CPD notes that instead of being furious at their own member for his desire to kill people and indulge wanton destruction they were mad at the FBI and more worried about bad publicity.

Apparently having murderous bomber wannabes in their midst wasn’t that big a deal.

The paper notes that in a video of an OWS meeting one OWSer says, “We have a person facing terrorism charges on the lease of our warehouse. If this gets into the media, it would be a disaster.”

I guess having the terrorist among you isn’t as bad as the bad publicity when people find out? Notice no condemnation of the terrorist, there.

Another OWSer notes that they are trying send it all down the memory hole and have the landlord erase the accused’s name from the lease.

Another seems to think it is important that even though Hayne’s name is on the lease he never had the rent money in his possession. Why this makes any difference or absolves them from his membership is beyond me.

But the most telling part of the video was this…

During the general assembly meeting, one leader asked the group, “Is it just me? Aren’t you uncomfortable living in a warehouse where a guy has been arrested for terrorism? I don’t want to live in a place and have the FBI show up.”

If this isn’t hilarious! Instead of being ashamed that a would-be killer was one of their central members, they are disgusted that the FBI had once come to their warehouse HQ! They are more comfortable with a domestic terrorist being among them than they are with having the FBI around!

That’s pretty telling about what sort of people make up the Occupy movement.