I was awarded press credentials for NATO’s 2012 Summit in Chicago and, having no idea what to expect, what I found on day one was a study in contrasts. What occurred was sometimes amusing, often mundane, and sometimes even violent. But it was all democracy in action.

Early on the morning of day one, Sunday, May 20, I boarded a western Metra train under threat of having my equipment bags confiscated or at least me prevented from boarding the train with them. I was not ruffed up the “the man,” though and downtown I went riding high on the rails. Literally. I took a seat on the top tier of the train.

The Summit didn’t start well as the NATO advance video called Chicago the Illinois Capital (It isn’t) and the place where Obama grew up (Again, it isn’t).

Upon reaching the gathering point for the press in beautiful downtown Chicago I boarded the super, double, secret press shuttle bus that took us down the service streets, steering well clear of the surface roads, straight to Chicago’s McCormick Place convention center, site of the NATO Summit.

Of course, before I was allowed on the super, double, secret press bus, bomb-sniffing dogs were loosed to make sure I had no underwear-bomb on my person or in my equipment bags. After I was officially cleared, I boarded the bus with local Chicago TV newsreader Jay Levine.

There were members of the FBI, Homeland Security, Chicago Police, the U.S. Marshals as well as U.S. Airmen and Army officers all there on duty to make sure our tender media people were safe and secure.

I was later to learn that out on the streets of Chicago the number of security of all sorts made the way to McCormick Place seem like it was lightly guarded!

Inside Mac Place, was a sea of press from all around the world. The pressroom seated up to 1,715 or so members of the media in a room that could have housed a dozen single family homes. There were nice little lamps at each seat, free WiFi, and food. Lots of food. Connie’s Deep Dish Pizza, a Chicago specialty, hamburgers, hotdogs, salad, all sorts of things. Pop, tea, Coffee… it was a veritable smorgasbord.

It was nice and orderly inside the vast conference center and nearly quiet as a library as the many members of the media went about their business.

Not knowing what to do first, I followed a pile of foreign media to see where they were all headed. It was to be an interesting thing, I found out. I thought I was going to get an up close and personal with Afghan PM Hamid Karzai. A gaggle of us were led by the dutiful State Department chaperones off to the private meeting room where we were told the fabled man was to meet and greet us. We waited, waited, and waited some more and then we found out that the PM decided he didn’t feel like joining us. Without any explanation the press availability was cancelled.

I had secured access to the opening ceremony where President Obama was to welcome the incoming dignitaries, but missed it because of Mr. Karzi’s truculence. I did get a few photos, but they aren’t good ones.

At this point, I got my updated badge for Monday morning and decided to take to the streets to see how the other side was living.

So, out to the streets I went. That was when I found out how heavily the Chicago Police and other security forces had blanketed Chicago’s famed Loop. I made my way to Grant Park to see the tale end of their programs there. Afterward they began a march southward toward the conference sight. I lagged behind to take some photos of the nasty mess of garbage they left strewn upon the ground.

After lagging behind for a while I hurriedly tried to catch up with the protester’s march. As it happened, the march went from Grant Park all the way to the temporary chain-link gates surrounding McCormick Place.

I trundled along with the several miles long train of protestors. The throngs of mostly white faces marched, chanted, yelled, and cursed, holding their signs and banners, wearing their outlandish costumes, and self-satisfyingly congratulating each other with fists in the air and smug smiles all around, happy that they were making a difference.

What the difference is that they thought they were making was not as evident as their personal satisfaction as participants, to be sure. It didn’t seem that there was much cohesion to the protests, in the end

Just about every left-wing issue was marked on their signs, and tumbled from their lips. From the typical young Occupy Wall Streeters, to the free Bradley Manning supporters, the free the Palestinians folks, and the free Abu Jamal Mumia, a smattering of clean energy dudes, the always present union thugs, to those demanding free healthcare and free education, it was all there. Even PETA was there. All sorts of socialist groups, communist groups, Muslim terror-supporters, and the ever-present Black Blockers in their black clothing and bandana shrouded faces were there. It seemed that every leftist constituency had its representatives. There were even some folks with anti-NATO signs, believe it or not. Granted those were preprinted and fewer in number than one should expect for a protest march headed toward a NATO conference.

About the only “people of color” I saw was a small group of Filipinos who for whatever reason was demanding that the U.S. get out of the Pacific Rim. I also saw a band of Palestinian’s touting their support for that terrorist group. Other than that, it was a sea o white faces, young and old.

This, of course, made the whole thing more of a circus than a protest. But one thing that it was, was peaceful. All the way until about 5PM when the black blockers finally got their dander up and started some violence. The Chicago Police wasted no time in gentility and cops enclosed in riot gear waded in with billy clubs in response. Arrests were made, needless to say. Remember, these are the sort of fools about whom former Speaker of the House of Representatives, Nancy Pelosi, said “God bless them.”

I didn’t bother much with video, but I did get a few minutes of some protesters chanting “F**k capitalism.” I captured this video because it was amusing to me. As these protesters were chanting some checked their texts on their expensive smart phones and nearly all had expensive designer sneakers and clothing on. It’s a bit hard to believe they hate capitalism so much.

I made it to the end of the protest where the police had stopped any further southern advance.

At that point I left the scene before the black blockers got their blocking on. I was alerted via phone by John Ruberry of Chicago, who was on hand near ground zero at Michigan and Cermak, that the violence had begun. I was glad to miss it.

On the long walk back from the numbered streets of the far south Loop to the Jackson Metra Station situated west of the LOOP, I decided to take State street, a few blocks west, instead of retracing my steps on Michigan Avenue. On this street I saw an interesting thing. Most of the faces I saw on this street were for dozens of blocks those of Asians! These Asian tourists and Asian residents of Chicago seemed to prove that much-bandied adage that Asians are smarter than others. These people were smart enough to stay away from the nuts on parade over on Michigan and were able to enjoy their Saturday in the city anyway.

As the black blockers started their rows I was getting ready to board my train back to the western suburbs. In Union Station I was met with yet another segment of Chicago: Baseball fans. After their exciting ball game the throngs of Cubs fans filed into the old station to catch their trains home. Boisterous, some drunk, but all showing evidence of fatigue from their own long day of Chicagoing, the Cubs fans and I rumbled off to the suburbs, another day’s energy spent.

My Chicago experience is not yet over, though, Too early in the morning I’ll head back downtown for day two of the NATO Summit. 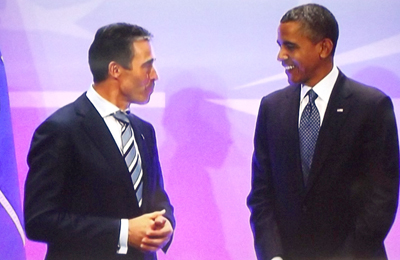 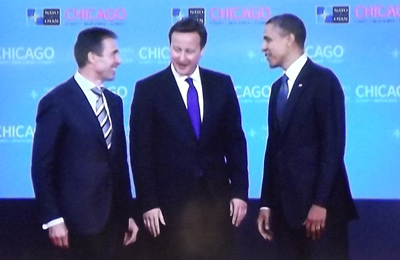 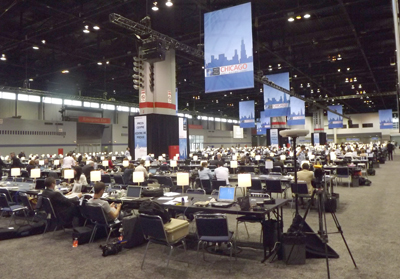 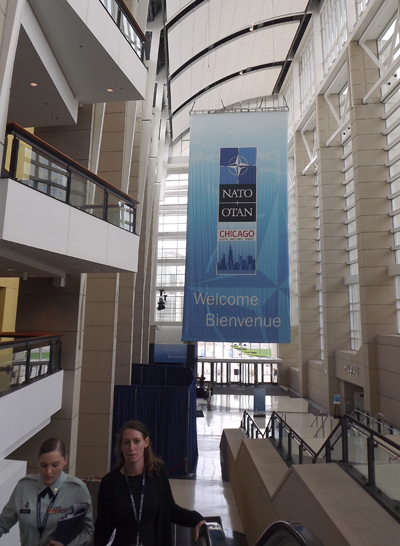 Headed outside for the circus… 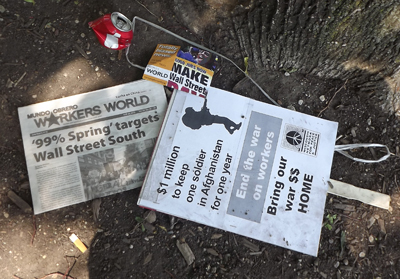 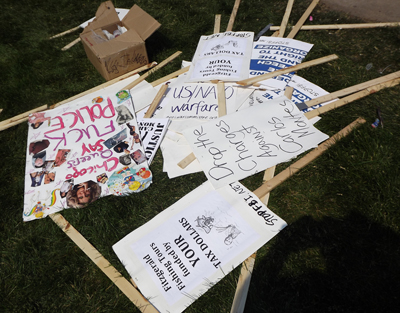 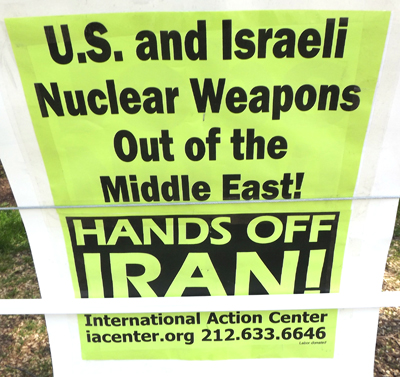 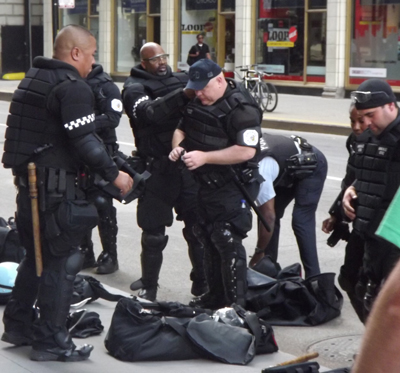 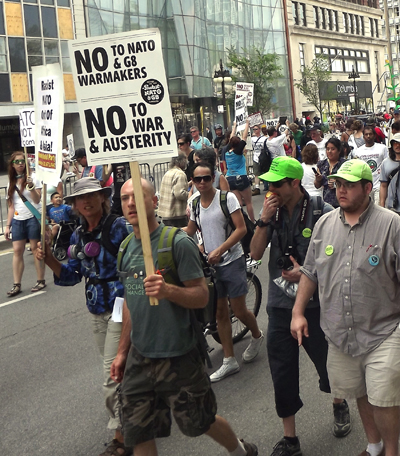 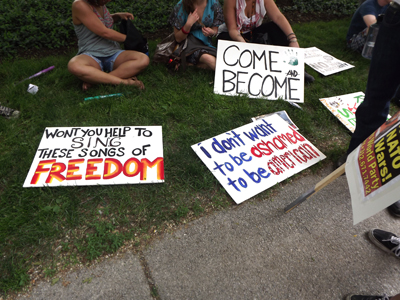 Ashamed to be American. I was too just looking at them! 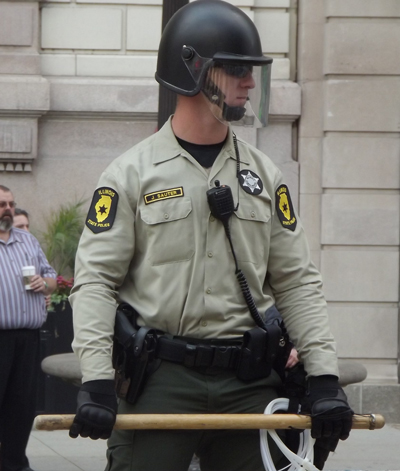 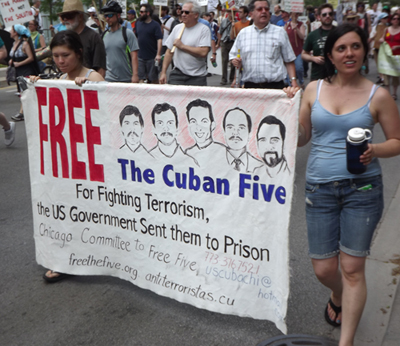 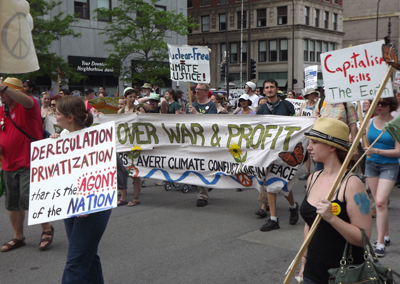 Gosh. Did you know capitalism kills the earf? 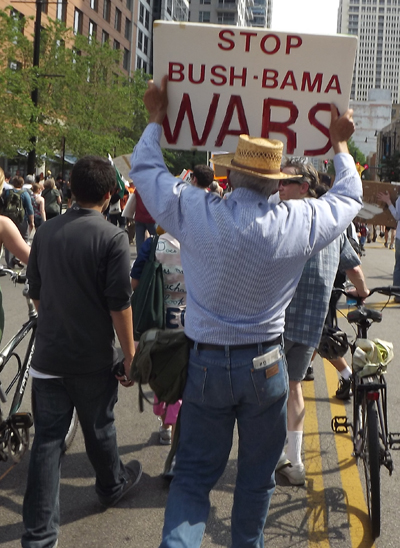 Not happy with that darned ol’ “Bush-Bama” 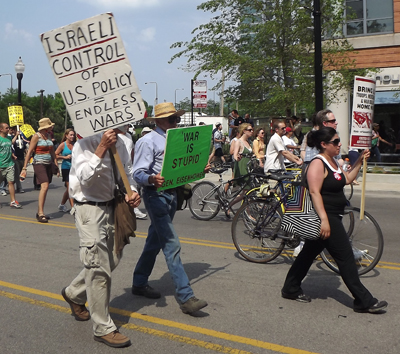 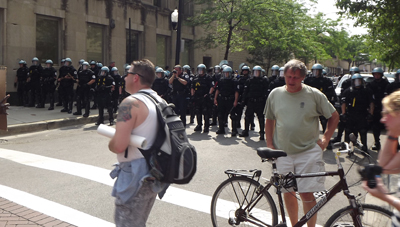 Cops cordon off the side streets at nearly every block 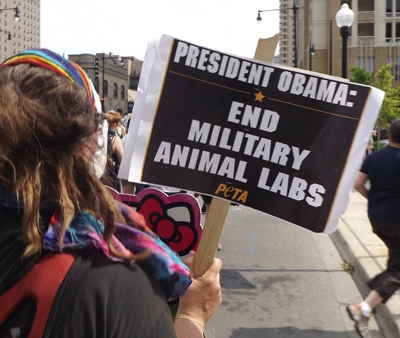 PETA is against military animals, or something 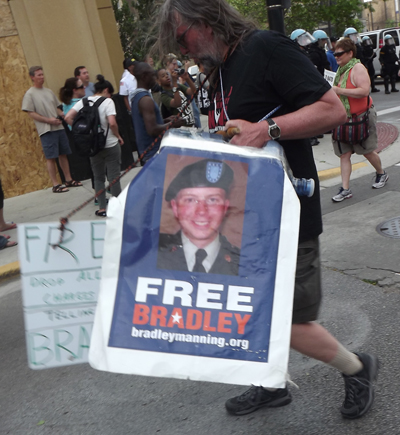 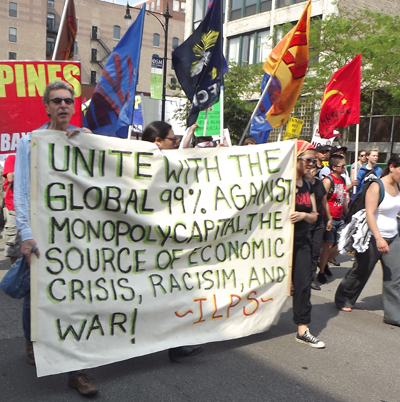 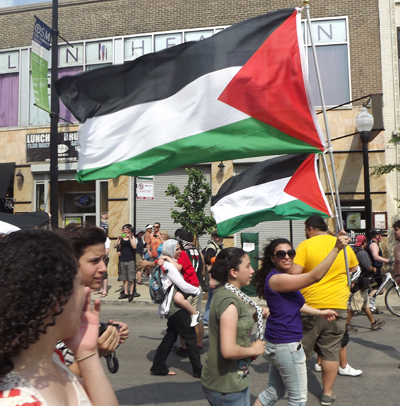 We love Pali terrorists, don’t you? Death to israel! 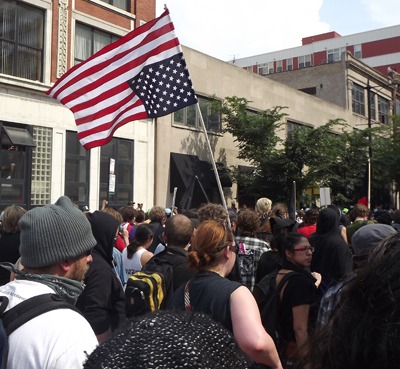 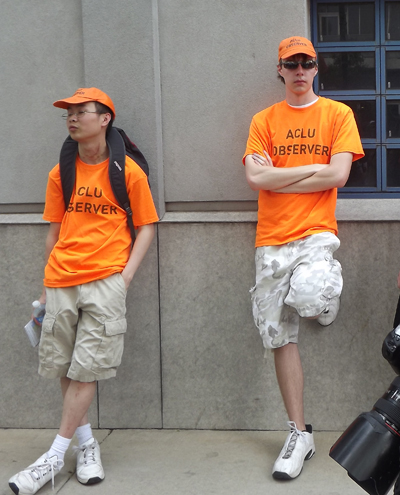 15-year olds act like they understand “rights” well enough to be “ACLU observers,” or something