Why is the Georgia Democrat Party Employing a Convicted Criminal?

For some unknown reason, the state Democrat Party of Georgia’s Political Director, one Ali Rashad Richey, is a man with a long arrest record and no one seems the last bit worried about it in the Peach State — neither politicians nor the media. This man’s arrests are for such offenses as burglary, assault, battery, driving offenses, and violation of probation. In fact he’s been arrested at least 12 times in the last decade.

Are Georgia Democrats so used to convicted criminals in their midst that no one cares about this?

This seems to be the same Ali Rashad Richey, hereafter known as Booking No. 0615617, that has a long arrest record.

These questions were first raised by Georgia blogger Andre Walker at his blog Georgia Politics Unfiltered. Soon thereafter, Michael Bates did some background research and then Deb of Nicedeb began doing some more blogging about Mr. 0615617’s recent past. They found that Mr. 0615617 even has a mugshot posted online for everyone to see!

Apparently this Richey, also living at the same Morrow, Georgia address as that listed on the Democrat Party disclosures, has been arrested at least 12 times for all sorts of offenses such as those noted above. His last arrest was as recent as 2010.

Interestingly, Mr. 0615617 is noted as having a “masters degree in theology,” and styles himself a minister of sorts having been “ordained” by the mail order outfit United Christian Ministries International.

So, what is the deal, Georgia Democrats? Are you going to disavow this violent criminal and fire him, or don’t you mind such folks being a paid staffer for you? And how about you, Democrat voters of the Peach State? Do you like the idea of the funds you donate to your party going to an out-and-out criminal with a violent past? 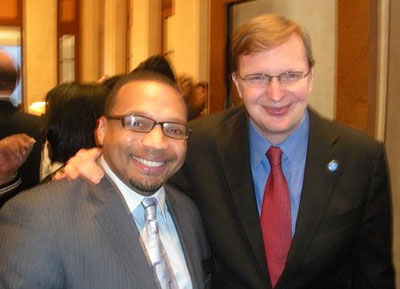