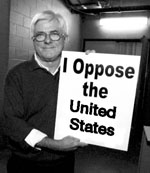 Old-timer Phil Donahue, about who rumor has it used to have some sort of TV show back in the previous century, has recently turned up on NPR for some unexplainable reason. And, like his long past career, he’s dwelling equally in the past with his new comments about the authorization of force against Iraq in 2002. But he’s adding a new spin to the now irrelevant discussion by adding to it all one of the left’s favorite tropes: racism.

What does that mean? To Donahue it means that these African American congressmen were better, smarter, and free of racism, I guess. Only whites wanted to kill innocent Iraqis, hence the racism.

On NPR’s Smiley & West show*, Donahue floated the idea that all the African Americans — in fact he said “every person of color” — voted against the war in Iraq. Apparently, Donahue thinks that this is because all “the white people in Congress” are racists.

After discussing his involvement in an anti-Iraq war movie back in 2008, this is how the long retired Donahue phrased the issue:

Here’s what I learned. I watched the debate on the Iraq war resolution where, you know, no body obeys the Constitution. Congress says “here, Mr. President, if you think you have to.” You know, and then if it doesn’t go that well it’s “well I did,” and “He said.” It’s a CYA. Cover your… backside. And uh, you know what, you know what, I’m gonna tell you something I bet you didn’t know. Every person of color in the House voted no. Except for Jefferson, Congressman Jefferson from Louisiana. He’s the guy with the money in his freezer, remember that?

Talk to me about that, I mean what did they know that George Bush didn’t know and all those white people in Congress didn’t know?

Now you’re gonna say, “They know their kids are the first ones that are going to go,” that’s certainly part of it but it has to be more to it than that.

So many lies in that bit of doggerel it’s had to know where to start, but right off the top let’s put to rest the lie that only blacks go to wars — or are even the first to go.

Since we went to an all volunteer military, the truth seems to be that middle class and upper middle class families supply more members to our armed forces than the lower classes. So neither “the poor,” as Tavis Smiley tried to say in the podcast, nor African Americans, as Donahue stated, are forced to bear the brunt of our wars. The oft repeated claim that the lower classes join the military because they have few other options is simply a myth.

As to the racial composition of our military, the most recent Heritage Foundation study shows that just over 65% of new recruits are whites whereas new recruits that are “Black or African American” measure in at less than 13%.

Then there is the claim Donahue made that no “people of color” in Congress voted for the Iraq invasion. This is also untrue. Not only did several Hispanic Congressmen vote for the resolution, so did several African American congressmen other than Rep. Jefferson.

Along with the aforementioned Jefferson, Harold Ford, Jr. (D-TN), Albert Wynn (D-MD), and Sanford Bishop (D-GA), also voted yes. So did the only black Republican Representative at the time, J.C. Watts of Oklahoma. As John Ruberry quips, “Hey Phil: not all GOPers are white.” (Roll call of vote)

It is rather shameful that the elderly Donahue thought that injecting racism into the long past Iraq resolution from 2002 was a good idea, isn’t it? But that is how these lefties are. They see racism in everything and will spare no historical event to retroactively make it all about race.

*(This discussion starts at about 20 minutes into the podcast. The podcast is titled Phil Donahue and was released 4/12/12)