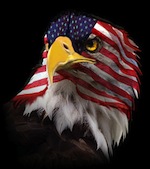 A bar in Charleston, South Carolina has been forced by the company that owns the property upon which the business sits to remove an American flag and the popular black flag that honors Vietnam POWs and MIAs that the bar manager had raised months ago.

Imagine in this day and age when we have soldiers in harm’s way in foreign lands this property management company is so unpatriotic like this!

In October of last year Hope and Marty Young, owners of the Chucktown Tavern, were asked by local military vets to raise the flags in honor of veterans. The flags have flown there ever since.

But in March the Youngs were abruptly told by landlords Beach Management to remove the flags presumably after another tenant complained about noise and other minor annoyances caused by the bar during an outdoor event held there.

One might think that Beach Management has some legal reasons for their actions? Perhaps there are some city statutes that are being violated?

What s even more confounding, he said, is that city leaders say the flags don t violate any part of the city code. Planning Director Tim Keane said Wednesday that both banners are legal under the city code because they aren t commercial in nature. He called them “just fine.”

Friend of the blog Jeff Quinton helps supply the contact info for Beach Management should you desire to let them know that forcing people to take down U.S. flags is not a neighborly thing to do.

The CEO of The Beach Company is John C.L. Darby and the Chairman of the Board is Charles S. Way, Jr. Donna Brashier is identified in the article as property manager for Beach Management.

Since I was alerted to this story early in the morning on April 5 and wrote my treatment of it that morning, the Beach Company has released a statement. Below is the company’s statement as sent to me via email.

OFFICIAL STATEMENT FROM THE BEACH COMPANY

We apologize for the misunderstanding pertaining to the display of flags at our property in Charleston, SC. Presently we only have approval from the City of Charleston for green and red banners at this location. Since recent events we have not received documentation from the City of Charleston of any sort that would give us the proper authority to make changes to the existing banners at this location; however with your encouragement, we are expediting a formal application to the City’s Board of Architectural Review to allow other flags to be displayed.

Furthermore, it has been brought to our attention that a South Carolina Law was passed in 2002, South Carolina Act No. 344, Section 27-1-60, to allow the American flag to fly regardless of existing zoning laws. This being the case an American flag will be raised and flown on each flag pole next week.

Finally, and most importantly, we have the utmost respect and honor for our country and its veterans or those military personnel taken as prisoners of war (POW’s) or listed as missing in action (MIA’s). We are proud Americans who salute our Armed Forces heroes.

God Bless America,
Your Friends at The Beach Company
www.thebeachcompany.com

Another press release from Beach Management:

Charleston, SC (April 9, 2012) – The Beach Company Officials met today with Mayor Joseph P. Riley, Jr. and other City of Charleston Officials in an effort to resolve the flag controversy at its Majestic Square office building in downtown Charleston.

As stated by Company Officials in previous press releases, The Beach Company is seeking clarification from the City, as there has been conflicting interpretations regarding the types of flags at this location. The Beach Company sought the City’s approval to suspend all the Board of Architectural Review (BAR) restrictions previously mandated in favor of providing a space for displaying the American Flag and the POW-MIA flag to honor and support all Americans having served in our armed services. Mayor Riley indicated to The Beach Company that the City would support the Company in flying the POW-MIA flag and would not enforce ordinances that were required in 2000 to allow only banners of green and red. In addition, The Beach Company urged the Mayor to seek a more appropriate space on the peninsula for the display of this flag so to properly honor the commitment and bravery of our country’s heroes.

The flag controversy began when a tenant and its customers of this building removed the existing banners, which were not part of their leased premises, and raised its own flags without seeking the approval of Company Officials. The Beach Company, out of obligation to enforce the BAR approval, removed the flags to gain compliance and to seek an amendment and reversal of the BAR’s original stance on its banner displays for this property.

Subsequent quotes of misinformation by many parties have circulated and prompted the Company Officials to seek the City’s immediate approval to return the flags that were previously not allowed. With this resolution, The Beach Company is very excited and proud to display both the American Flag and the POW-MIA flag on its property, with a display of respect and heartfelt thanks to each and every Veteran.