Now, usually TV Cable shows aim for the over the top as opposed to the understated, right? Well, speaking of “tops” Lifetime seems to have had a sudden attack of squeamishness over actress Jennifer Love Hewitt’s… shall we say, ample… bosoms.

Hewitt plays a single mom that found herself impressed into service as a massage therapist turned prostitute in the new Lifetime show The Client List.

Advertisements for the show have been quite racy with lots of skin showing and all sorts of lingerie and a two-minute promo in the form of a music video had tongues wagging and men drooling all spring. 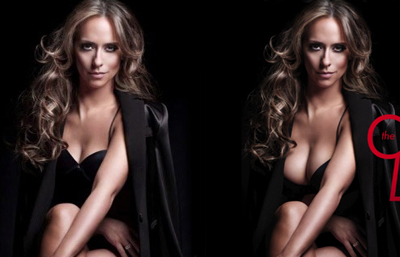 But all of a sudden, Lifetime seemed to pull back on it’s racy promo posters. There is an original poster out there with Hewitt nearly baring all with the camera filled to the brim with her cup, as it were.

But a second poster suddenly made the scene with a decidedly less bosomy Hewitt wearing a much more modest bra, one that covers much more of her than the original.

It’s hard to figure what to make of this deal. But, there you have it. Lifetime gave Jennifer Love Hewitt some breast reduction. As a man, I have to say I object.