Hollywood Reporter Wishes She Had Disease to Stay Skinny? 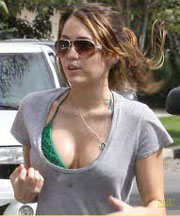 I guess now it’s cool in Hollywood to make light of diseases, illnesses, and allergies. At least it is for one Internet entertainment reporterette who apparently wishes that she had some sort of disease if that disease made her skinny. Seriously, this is the sort of vapidity that makes the denizens of Hollyweird and their hangers-on appear so reprehensible.

On her April 9 YouTube entertainment report about the latest Miley Cyrus rumors, host Stephanie Bauer reported that the singer took to Twitter in reply. Tongues were wagging recently that Cyrus might be anorexic due to recent photos of her gaunt figure. Cyrus, though, says she stays skinny mostly because she has a “gluten and lactose allergy.”

“It’s not about weight, it’s about health,” Cyrus said. “Gluten is crap anyway.”

For her part, hostesset Bauer wished she could have a disorder, disease, or allergy, too, if it made her “look amazing” like the teen singer.

It doesn’t seem like Milley’s anorexic. She is photographed leaving the gym every single day and if a gluten and lactose allergy is her diet secret I want it because she looks amazing.

Come on! Now people in Hollywood want to take on diseases and disorders if it makes them look good? Seriously?

There is no reason at all to wish you had a disease just for cosmetic effect. They are called diseases not because they are beneficial to us but because they adversely affect our health! Further, I doubt anyone that really has a disease would wish their misfortune on anyone else.

Yet here we have an attractive, but air-headed entertainment hanger-on like Bauer wishing she had a disease just so she could look good. This really is the sort of empty-headed thinking that gives the people of La La Land such a bad reputation, isn’t it?

Miss Bauer now works for Hollywood scoop.com, but was once a local reporter for an NPR station in Florida as well as AM 850 Miami, and WUFT-TV.