As far as race-baiter Roland Martin of CNN is concerned, America is guilty until proven innocent. Guilty of racism as some sort of original sin, one that can never be washed away by either deeds or absolution.

On April 26, Martin got his inner Je$$e Jack$on on and tweeted: “I simply accept the reality that racism is in the DNA of America. And when that button is pushed, the true feelings come tumbling out!” 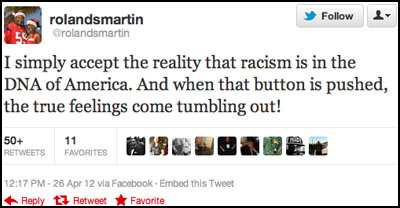 Mark down Mr. Martin as another one of those that seem not to understand that racism is a human frailty, not a uniquely American one. Also mark him as a member of the race-industry that is scared to death that people will realize that America has come a long way toward alleviating racism, far from the days of slavery and Jim Crow.

In fact, Roland Martin himself is an example of the death of overt racism in the United States. He is a prominent and successful black TV broadcaster. How could that happen if America was drowning so in racism?

Another benchmark of the practical end of racism in America is the constant “the first African American to…” notations one used to see in the 60s and 70s. There are no areas that African Americans have not joined, excelled and found success in this country.

Needless to say, even the White House!

Yet with all that advancement both socially and in the law, people like Roland Martin still imagine that racism is in every mind.

But also telling is Martin’s actual misuse of the word “racism,” a misuse that is epidemic with the far left and the race-baiting industry. Like many in his political milieu, Martin seems to think that “racism” only means whites disparaging blacks. But this is a skewed definition of a word that mean hate directed at any race, not just white against black hate.

We see racism in many ways other than white against back, don’t we? We see Jacksons, Shaprtons, Farrakhans, and “Reverend” Jeremiah Whites displaying their hatred against whites, Jews and others nearly every single day.

Racism is a word constantly misused by race-baiters such as Roland Martin and it really should stop.

Sadly, racism is not something that people like Roland Martin want to stop. It is something they love in that it keeps them in control of the debate and gives them a role to “lead” something. After all, if America’s Afrincan American community were to accept that their lives are in their own hands and not in the hands of evil racists that want to keep them down they wouldn’t be constantly looking to people like Martin or Je$$e Jack$on or Al $harpton to “lead” them. They’d be out there on their own pushing to succeed instead of wallowing in manufactured pity.

The shame of leftists is that they have destroyed the wonderful legacy of great men like Frederick Douglas and Booker T. Washington and have instead given this country the guttural race-baiting and hatemongering of Cornel West and Reverend Wright.