As the media has it the story goes like this: poor, unassuming, innocent Georgetown coed, accidentally ends up in front of Congress pleading for “reproductive rights.” Evil mean conservatives led by scalawag Rush Limbaugh unfairly call her a slut and announce a war on women to end their “access to contraception.”

Of course, that’s the left-wing media’s narrative. The real tale is that this is as manufactured a story as you can find, one created for the purpose of assisting Obama and his Democrat cohorts win the upcoming election. It’s all a scam.

The “coed” in question is one Sandra Fluke, a young woman that has been presented as some sort of expert in “reproductive rights” (another one of those faux rights we that have been foisted onto the public debate of late), but is she? Where did Mz Fluke really come from and what is her background? Why was she presented as some sort of “expert” by a sitting Congresswoman, the former Speaker of the House, no less?

The media is presenting this Fluke character as if she is just a fresh-faced, wide-eyed, 23-year-old coed that has been accidentally swept up in this story. But the fact is, this Fluke woman is hardly the simple Georgetown coed that she’s being portrayed as. Fluke has already got years of big government, left-wing activism under her belt. It’s hardly a fluke that she was the one picked to ladle out this coordinated election season campaign game plan.

As early as 2009 Mz. Fluke was involved in left-wing efforts to create the nanny state. As her bio on the Georgetown Law website tells us:

…Sandra is the Development Editor of the Journal of Gender and the Law, and served as the President of Law Students for Reproductive Justice, and the Vice President of the Women’s Legal Alliance. In her first year, she also co-founded a campus committee addressing human trafficking. Cornell University awarded her a B. S. in Policy Analysis & Management, as well as Feminist, Gender, & Sexuality Studies in 2003.

Other notations include her gay rights activism and other “women’s rights” activism. No mention made of her concern for the rights of men, naturally.

She is also not an innocent young kid. She’s 30-years-old despite being reported as but an innocent 23-year-old student.

There’s something else she is not, and that is just an aggrieved student accidentally caught up in this media maelstrom. In fact, she is an activist against conservatives. Last year, for instance, Fluke took her campaign against “conservative” universities on the road and led seminars to that end held at Berkeley. (Thanks JWF)

In other words, we’ve been sold a bill of goods. This woman is a hardcore, middle-aged, political left-winger, not any innocent law student.

Another thing is that Democrats tried to foist this faux “expert” on a congressional committee hearing before. In the middle of February, the House Oversight Committee held a hearing to hear expert testimony on President Obama’s decision to force religious organizations to fund contraception use for employees.

The hearing had actual experts that spoke on both sides of the issue but the meeting was about the Constitutional issue of religious freedom, not so-called “reproductive rights.” Mz. Fluke’s inclusion as a speaker was therefore denied because she is neither an expert on the Constitution, interested in religious freedom, nor is she an actual expert on the medical uses of contraception. She was merely a left-wing activist with no pertinent expertise.

This is why Representative Nancy Pelosi (D, CA) held her own special hearing to give Fluke her platform for activism. Amusingly, while Democrats complained that it was a crime Fluke was not allowed to testify at the earlier hearing, in Pelosi’s dog and pony show, Fluke was the only one allowed to speak. Hypocrisy thy name is Democrat.

Democrats are also attempting to fund raise off this issue. Democrat National Committee Chair Debbie Wasserman Schultz recently sent out a fundraising email lamenting: “Why we’re debating a woman’s access to birth control is beyond me.” Schultz lying continued in the letter when she said, “we need to stand up for the women and men whose access to care would be denied if the GOP has their way.”

Now, we know that this controversy was fueled by Rush Limbaugh’s off handed comments that Fluke (or the coeds she was pleading to get free contraception) are “sluts.” But, injudicious as his comment was Limbaugh did not start this fire. The Democrats did and chief among them is President Obama whose decision to rip the Constitution to shreds and supplant it with his left-wing powergrab is what started this whole ball rolling.

If President Obama had not decided to summarily dispense with the First Amendment — one of America’s original, founding principles — by Presidential fiat, this discussion would not be in the offing. And why is this the story of the day? Because Obama thinks it is in his best interest to try and keep the GOP portrayed as anti-woman and the Old Media establishment — Obama’s defacto campaign press office — is pleased to help him do that.

This story has been manufactured from day one. Remember that it was ABC’s George Stephanopoulos who brought this question into the public debate first at one of the Republican debates — and who doesn’t realize that he was programmed to do so by Obama? It is a false narrative invented in the White House, furthered by the President’s extremist, left-wing Party, and kept rolling by their lapdogs in the Old Media establishment.

Finally, how do we take this faux outrage from the extreme left seriously when these same type of women are organizing “Slut walks,” eh? 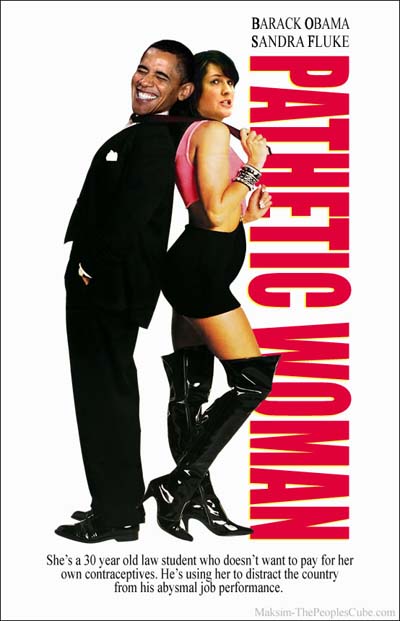