The country has lost a leader. Early this morning I was woken by texts, phones calls, and Facebook IMs to the devastating news that conservative activist Andrew Breitbart passed away, late last night. He was only 43.

Andrew was a force of nature, for sure. He was everywhere at once, attended every conservative gathering of note. I met him from Las Vegas to Chicago, from Washington DC to Cancun, Mexico and everywhere in between. Anywhere conservatives gathered he was there to cheer them on and urge them on to greater activism against the extremist, left-wing media establishment that has done so much damage to this country.

He was the one that served as the platform to take down the anti-American group the Association for Community Activism Now (ACORN), his megaphone brought us the outrage of the Pigford case, and many other stories that shed a bright light on government waste, left-wing operations, and the liberal media’s attempts to distort the coverage of the news to fit their left-wing agenda.

Breitbart started his life of conservative activism working for Matt Drudge helping Drudge program his news coverage on the Drudge Report website, it was here Andrew began to see how pernicious the left-wing media really is. Soon Andrew went on to help Arriana Huffington start the Huffington Post website and ultimately he began his own series of sites, The Bigs. BigJournalism, BigHollywood, BigGovermnet, Big Peace and Beitbart news — all of which I write for.

I have to say, that Breitbart’s star burned white hot. He was always on the go these last 10 years so much so that it was a wonder if he ever got any time to sleep. He logged more air miles than a veteran pilot, in New York one day, LA the next and the great Midwest still the next. He seemed indefatigable but we now understand how his crusade took its toll on him physically.

Andrew was one of the most real, most generous men I knew. He never ceased to take a few minutes out to meet attendees, shake hands, pose for photos with them, and chat. Let me assure you that he was the genuine article. What you saw on TV was Andrew Breitbart. There was no artifice about him. He wasn’t portraying a character or presenting a false front. There weren’t any unguarded times when the “real” Andrew came out. He was exactly what he seemed to be.

One of my fondest memories with Andrew was when we were in Cancun, Mexico in 2010. He, myself and three other bloggers, just the five of us, sat in a hotel room and for hours talking about life, the media, and the state of the conservative movement. It was a quite night, but one that proved to me that Andrew was just as presented. No faux Andrew. He was a real, passionate, brilliant man.

Andrew leaves behind his wife, Susannah Bean Breitbart, 41, and four very young children. Please pray for the family for this devastating loss.

Rest in Peace, Andrew. You are a great friend, a great boss, and a credit to your country. You will be sorely missed as there is so much more work to do. 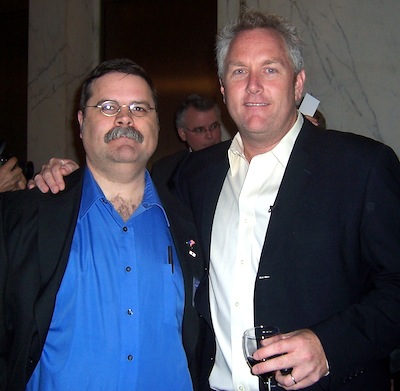