Ill. Non-Romneys Your Choice on Tues is Rick AND Newt--That's Right, You'll Vote for BOTH of Them! 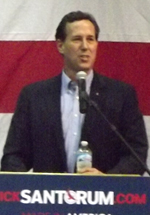 If you are an Illinois voter that considers himself an ABR (anybody but Romney) you have a bit of a dilemma. Rick Santorum has been surging across the country as the final non-Romney but he has a major problem in Illinois. He can win the popular vote and still not get all the delegates he’d like. In fact, because of the way the system works in Illinois, he can’t get the delegates.

So, what do non-Romney voters in Illinois do? If you want to stop Romney from winning (or at least running away with it easily) the only answer is to vote for both Newt and Rick. Oddly enough it can be done even without the famous Chicago corruption aiding you.

How can this be done? Read on, dear readers.

For those unaware, in Illinois we don’t just have a say in the beauty contest that is the popular vote. We also directly elect our delegates to the GOP convention. When you go to the voting booth you’ll vote for Rick, Newt, or Romney, of course, but you also have to continue down the ballot and vote for their delegates. Just voting for the top of the ticket won’t suffice to send your candidate to the big game, you must vote for his delegates too.

Back to Rick’s problem. You see, Santorum was never able to get enough signatures on his nominating petitions in order to get delegates slated to appear on the ballot in every Illinois district. That means in some districts in the state you will have the opportunity to vote for Rick, but it will be a meaningless vote for you because you won’t have his delegates to vote for.

Santorum has bitterly complained about the Illinois system. Just last week, for instance, he called it “Byzantine.” As right as he is about it, the system is the system whether he, or we, like it or not. Rick’s problem was that early in this process he seemed like he was going to be the perennial 3 percenter, never being able to rise to the level of a real contender. That meant he had little money to organize in Illinois and few volunteers to to build upon. His team was not able to circulate petitions in enough volume to get signatures for his delegates and so he lacks delegates in four districts.

Interestingly enough, by law Santorum could have been kept off the Illinois ballot entirely, but team Romney headed by Ill. Treasurer Dan Rutherford decided to drop challenges to Santorum’s petitions and allow him to stay on the ballot. Two things went into that decision. First, Santorum was thought not to be a threat way back when the petition process was being handled last year and secondly, Rutherford wants to run for Governor and he didn’t want to upset even a small block of GOP voters — those that would support Rick. Rutherford made a political calculation that was more for his own benefit than for his candidate’s, for sure.

The point of all this being, if you are a non-Romney voter in a district where no Santorum delegates appear you have a problem because if you don’t pick any delegates Romney will likely get them by default. If stopping Romney is your goal, not voting for any delegates will defeat your plan.

The solution? If you are a Santorum supporter who feels he’s the only one left that can defeat Romney, then you are going to have to vote for Newt’s delegates.

It seems somewhat counterintuitive, of course, but it is reality nonetheless. If you want to denude Mitt Romney of delegates, you’ll just have to pick Newt’s delegates in those districts in Illinois that won’t have Santorum delegates to vote for.

The strange part of it is you’ll be voting for both Newt and Santorum. And it will be perfectly legitimate.