DC Deputy Mayor: Dear Victims of Crime, Better You Are Beaten, Raped, Stolen From Than You Protect Yourself 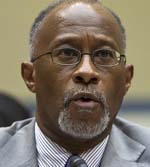 Washington D.C.’s Deputy Mayor for Public Safety and Justice wants you all to just stop whining about the rising crime in his fair city. He wants you to continue being a victim and like it. Not only that, but he thinks it’s a good thing that you should become a victim. Better that than protecting yourself, don’t you know?

That is what Dept. Mayor Paul Quander told victims of crime in Washington D.C. last week during a Third Ward public safety meeting. You don’t have any right to protect yourself, Washingtonians. You have only one response available to you: allow evil to prevail.

Unlike other big American cities, crime in D.C. is up 40% in the first two months of 2012. But Quander thinks it’s no big deal. Cowering is his motto.

A young citizen attending the meeting came to the open microphone to ask Dep. Mayor Quander what crime victims are supposed to do when confronted with violent criminals bent on mayhem.

“The choice that you have to make,” Quander rambled, “is to give them what they want. You walk away and you live and you survive.”

But the young man was incredulous and for good reason. “But how do you know that you are going to live and survive, you are completely at their mercy,” the young man asked.

Naturally, like all arrogant, left-wing, government officials who are confronted with questions that cannot be answered while observing their wrong-headed left-wing dogma, Dep. Mayor Quander wanted to shut down this young man’s questions, tried to intimidate him in the public forum, and tried to get him to “talk later” instead of then and there. And who isn’t smart enough to know that Quander had no intention of allowing the young man to continue the conversation later, eh? Don’t we all know that Quander would have hid behind his armed bodyguards as he scurried out of that public meeting as soon as it was over? He was not interested in discussion. He was interested in pronouncements.

In any case, the young man persisted. What should D.C. victims of crime do?

This is the left-wing blather disgorged from Quander’s mouth:

If you are armed, it escalates the situation. It is much better, in my opinion, to be scared, to be frightened, and even if you have to be, to be injured, but to walk away and survive. Because you can, you’ll heal, and you can replace whatever was taken away. But the trauma of that gunshot to you or to someone else is traumatic.

Um, so… being beaten — or “injured” as Quander so dismissively put it — raped, stolen from… that all isn’t traumatic?

This cretin does not deserve to be an official concerned with public safety nor, most especially, “justice.”