I attended the annual Northwest Suburban Republican Lincoln Day Dinner March 14 and took a handful of photos for your interest. This year’s special guest speaker was Former Speaker of the House of Representatives Newt Gingrich, in town making the rounds for his run for the White House.

I got a bit rushed by the Secret Service, sadly. I had taken a chair just to the right of the stage (audience right, not stage right) and had all my computer gear and whatnot out and in use and the Secret Service decided I wasn’t allowed to be there for what ever absurd reason. I was 5 tables away from the stage and in a corner, not in an aisle. Anyway, they grabbed all my gear and rushed me to the back of the room. Sheese.

Still I settled in and was at least allowed to take my photos. So, as the program began Radio talker Proft began the night with a joke. Not that this is uncommon, for an emcee to start with a joke, but it was an amusing one, so I’ll recount it here.

“What is the difference between a Democrat politician in Illinois and a mobster,” Proft asked. The answer: “A pension.”

Proft next introduced Newt’s wife Callista who then introduced the Speaker. 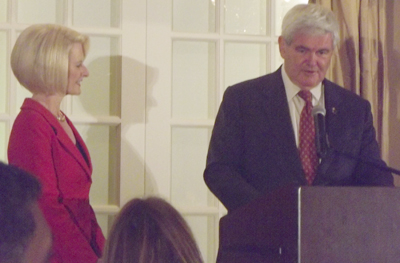 Seeing as how this was the Lincoln Day Dinner, Newt began with some words about the 16th President, noting that he was the president of technology for his day. Lincoln held a patent as an inventor, was a railroad booster (and corporate lawyer) and was always keenly interested in new war tech as he led the union to victory.

Newt segued to Reagan and noted that Reagan was also a man of innovation tying the two Illinois presidents together in that way. Newt then went on to say that he feels that this is the most important election since 1860.

He wants to be the candidate of science and technology, he said and he wanted to bring government into the new world from the moribund mess it is now.

Newt also had an extensive hunk on oil, natural gas, and energy. If you want to see some of Newt’s points on energy and oil, see Marathon Pundit’s short video from an appearance Newt made earlier in the day. It was the same talking points.

Newt wrapped up with a few choice slaps at Obama, of course, but he also had a slap at the media and even his opponents. He lamented that there is a difficulty of talking about large things in this race because “the media won’t cover it and my opponents can’t comprehend it so we just don’t have it.”

After dinner, Rep. Walsh gave about a two-minute address just urging everyone to get out their troops to help the candidates in this primary and the general to come. Dold spoke on small business, Roskam spoke about how important it is to get everyone involved, out walking districts, and to the polls and then introduced Rep. Schock.

Schock had a nice speech about Reagan and the state of Washington. But he had a very important warning. We must not allow Nancy Pelosi and her fellow extremists get back in power in the House he said. Pelosi was the reason that Obama was able to get so much of his extremist, left-wing agenda in effect. Allowing her and her ilk back in power will be very, very dangerous, Schock warned.

The night was interesting, anyway, and no protesters believe it or not.

More photos of the night 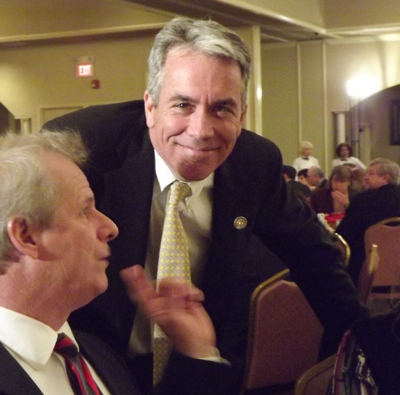 The night was sponsored by the townships of Barrington, Elk Grove, Hanover, Palatine, Schaumburg, and Wheeling.