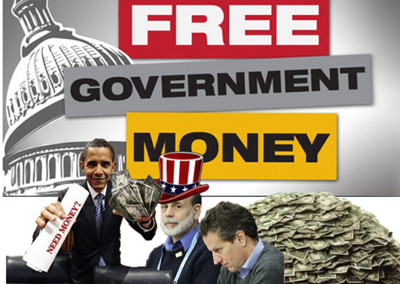 OK, you people, I am sick and tied of this. The Americans with Disabilities Act is NOT being fairly applied. That’s right. You read that headline correctly. Conservative, white, male bloggers NEED a hand from Washington. In fact, I’d say we have a right to it. We are being discriminated against even from those on our own side. It’s time for redress. I DEMAND a handout.

For years I’ve been wondering why the heck few of us white, male, bloggers ever make it big. Why aren’t there ever any white, male, conservative bloggers on TV or radio? Ever wondered that? There aren’t any. Think about it. How many can you think of? I can think of but one.

Oh, there are plenty of conservative Internet sensations that have made it big, mind you. There’s Mary Katherine Ham. Hot chick. There’s Michelle Malkin. Hot Chick and a minority to boot. There’s S.E.Cupp, no lacking the hotness there. There’s all the women from Smart Girl Politics, more hot chicks than I can shake a box of Viagra at (I did not get this from an online Canadian pharmacy. Really). Em Zanotti, Elizabeth Crum, Liz Mair, Pam Geller, Lila Rose, Susannah Fleetwood, Tina Korbe, Dana Loesch, Bettina Inclan — they are almost all married, or soon to be (good luck Bettina) so back off you slobs. Still hotness overload, already.
It isn’t just hot chicks, either.

There’s ZO!, AlfonZo Rachel. Despite being named “Rachel,” not a hot chick, but a black conservative guy. Then there is Kevin Jackson of The Black Sphere, another black conservative. Bob Parks of Black and Right — yep, black guy. Lloyd Marcus, ditto. La Shawn Barber, black female conservative. Star Parker also a female, black conservative. Many more, too. Joe Biden told me these are all clean and articulate bloggers.

As a side note, this whole minorities being conservative thing really chaps my hide. I mean, the left tells me that only white men should be conservative and all these minorities… well it’s just too much competition going on. Could it be that the left doesn’t know what they are talking about? I’m dubious.

Now, who do we white guys have that has made the big time? That dude from Red State. Orick Aaronson, or whatever his name is. Wait, it’s Erick something. Something Scandinavian, I think.

Oh, and Andrew Breitbart didn’t count. Some people defy all attempts at categories and he was the king of defiance. Besides, he was never really a blogger per se.

Anyway, obviously we are being discriminated against. Everyone knows it. I’ve heard it said in hushed terms. Talked about in the backs of conference rooms, said in quite conversation at one Kruiser Cabana or another.

See, I’m not the only one saying this. White guy John Hawkins of RightWingNews — he has that on his business card — has said several times even as a speaker that he toils with little reward.

There are other fine, fine white, male conservative bloggers that do excellent wok and couldn’t get any attention if they yelled “bomb” in an airport! There’s R.S. McCain. Great reporter, lives in the belly of the beast in DC, gets scoops all the time, treated like a redheaded stepchild. They won’t even let him have a nice fedora forcing the poor guy to wear that ratty old woolie he got at K-Mart in 1974.

How about good old Jeff Dunetz of Yid With Lid. You’d think being Jewish he might have a minority-centric leg up on the rest of us guys. But no luck.

Success has come to Jim Hoft of Gateway Pundit in the form of a million readers a day — or is that per hour — but he’s still stuck in St. Louis, so how successful can he be? Who chooses to live in St. Louis? CNN ignores him, Fox won’t send a car, not even a telegram from the Networks. I hear he had a star named for him at the International Star Registry, though. So he’s got that going for him, which is nice.

Of course, for the sake of brevity, I haven’t mentioned a thousand other great white, male bloggers all of whom I’ve stolen from — er, I mean helped with my linking to them. I mean, we’d be here all day if I listed them all and it wouldn’t do you any good because you won’t have heard of any of them. Besides, if I mention more they’ll just get mad at me for calling them “troubled” bloggers, if you will. And they won’t.

But add me to that list, too. A rant wouldn’t be a rant if the ranter wasn’t mad that the rantee was apparently slighting the ranter unfairly… I think I got that straight. We white, male, conservative bloggers can’t make a living. Can’t get ahead. Can’t catch a break. Worse, the moron deep pocketed conservative money-men on our side won’t give us a penny even though a million bloggers on the left make six figures a year from their left-wing, Richie Rich’s. Stingy bastards.

Oh, yeah, you say? What of Ed Morrissey, you say? You think you’ve got me with the now stratospherically successful pecker (Come on. I meant on a keyboard) from HotAir.com? You think he makes the lie to my claim?

No way Jose. He’s follically challenged so a definite minority. Besides, I am pretty sure he has pictures of somebody.

Don’t give me any crap about Glenn Reynolds of Instapundit, either. He’s a college professor. He doesn’t have to work for a living. He doesn’t need this assistance.

There is only one solution left. We need to get this playing field leveled, baby. We need a multi-billion-dollar slush fund to help us get by. My baby needs shoes, too. I don’t care if my babies are in their 20s. They still have to walk, and everything. I want my Obamabucks, my stash, my pot-o-gold, my gubbmint check. Make me the white, male, conservative blogger czar, O-man. We can call it the office of Male, American, White, Conservatives. I think that might be MAWC for short.

I’m waiting. Let’s get it moving along. Hell, I’ll even vote for Romney if he can add this idea to one of the pages of his three hundred fifteen page economic plan. Screw conservatism.