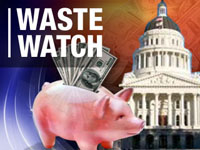 Oddly enough, a coalition of big tax hikers in California, including the American Cancer Society, has attacked me by name for daring to write about Proposition 29, a California ballot measure that will appear on this year’s ballot. Prop 29 will force Californians to foot the costs of nearly a billion dollars in new and unnecessary spending on the airy claim that the funding will somehow cure cancer and stop kids from smoking. Sounds a bit like Obama’s claims that his election would lower sea levels, stop global warming, make the U.S. beloved again, and put a unicorn in every garage, doesn’t it?

The accusation leveled against me is that I am “in bed with Big Tobacco.” Naturally, these left-wingers don’t bother with any proof. They just hang the claim out there and leave it at that. If I am working with Big Tobacco, I have to say that their checks are late. I didn’t even get a cool Joe Camel T-Shirt, the ingrates! (In case they pull down the page, I have a screen shot saved here)

But imagine. This coalition of deep-pocketed, big government-loving entities is coming after me by name. Seriously. Have you ever heard of billion dollar groups like these attacking a single blogger like this? It truly is a new world.

I certainly have written about Prop 29 many times over the last year, that I admit. But another hilarious line used against me in essence calls me a carpetbagger for doing so:

Ah, I see. I have no right to blog about California because I am in Chicago… in a state that ranks second in corruption and budget disasters only to, um, California. In fact, everything I have written about Prop 29 comes from sympathy with California’s tax-raped citizens because I am in the same mess here in Illinois!

Still, let’s look a little closer at this claim that a Chicagoan should somehow not be allowed to write about Prop 29, shall we? Take a look at the bottom of this big-money group’s webpage that attacks me. There you will see the name of Lance Armstrong whose big money charity, the Lance Armstrong Foundation, is supplying “major funding” — this group’s own words — to the fight to pass Prop 29.

Guess what? Lance Armstrong is from Texas. Why is it OK for a millionaire Texan to be meddling in California’s tax hiking new law but not me, a poor Illinois blogger?

Further, some of those other big-money cancer charities aren’t based in California, either! Just having an office in California doesn’t count for being California-based. So why are they a natural for California and I am not?

Now, the idea of Prop 29 is to fund the so-called California Cancer Research Act. This new legislation would raise nearly a billion dollars of new taxes to fund new buildings and invent hundreds of new state jobs — jobs that will result in even more state pensions to overload the already underwater California pension program — all in perpetuity, and ostensibly to “cure” cancer.

Aside from the porkbarrel spending, the funding is supposed to go for new cancer research, as if there isn’t already enough cancer research going on in scientific circles today. Infuriatingly for Californians, even as their economy is struggling, they are losing real jobs by the hundreds every month, and businesses are moving out of the state in droves, this new law won’t require that the taxes raised even be spent in California! That means in a day when Californians are already some of the highest taxed citizens in the country, even more of their money is going to be taken from them and possibly spent in other states to fund this “research.” In some cases, then, Californian’s new taxes won’t even benefit the state!

Other than creating cushy new state jobs, the taxes raised are also supposed to go for non-smoking campaigns. However smoking is declining steadily nationwide despite the current non-existence of the California Cancer Research Act so, why this nearly billion-dollar new legislation is needed to stop people from smoking is anyone’s guess.

The attack page against me also makes a few outright fraudulent claims. For instance, the claim that the CCRA provides “important taxpayer safeguards and strict financial accountability” is laughable. The truth is that the politically appointed board that will run this new boondoggle is not accountable to either voters or lawmakers. Their decisions are autonomous and untouchable.

In conjunction with the fraudulent claim that the CCRA is fiscally responsible, this group claims that, “California’s leading doctors, scientists and researchers, not politicians” will administer the program. But seeing as how the program is actually administered by a committee of 9 people, 6 of which are political appointees, this claim hardly seems to ring true! And the other three are taxpayer funded educators from California’s university system, so even they can’t be expected to be taxpayer advocates!

The group also claims “12,000 new jobs” will be created and this will increase economic activity in California. But will it? Unfortunately, it is far more likely to increase redistribution of income from taxpayers to government placemen and lackeys, instead of creating real jobs and real economic activity. This is all just government spending, not real economic benefits to California. If nothing else, President Obama has proven that this Keynesian fantasy of government overspending does not equate to a better economy. It hasn’t worked in Washington and it won’t work in California with the CCRA.

The group also makes all sorts of pronouncements on how these new taxes on tobacco will bring in billions in funding for these “new jobs.” This all violates the basic law of nature that taxing something gives you less of that something. The assumption that smokers will simply continue handing over higher and higher amounts ad infinitum for their tobacco products is absurd. And taxes on tobacco in California have already been raised multiple times to fund other government boondoggles.

The fact is, projected revenue will not likely keep up with the claims of Prop 29’s supporters. If revenues aren’t realized, where will these big spenders go when it doesn’t materialize? That’s right, back to the legislature to get more. After all, once a government program is begun it never wants to cut its spending, right?

Some taxpayer advocates in California have already noted that funding won’t keep up with demand for this new boondoggle. David Kline of the California Taxpayers Association says, “We don’t think it makes sense to create a new body of political appointees to oversee this money when the money coming in simply won’t be enough to keep the program going. The fact that they are all political appointees raises the issue of whether there will be more politics involved than hard science or real budgetary expertise.”

My sister-in-law lives in California and she tells me they are firing school bus drivers in her town and eliminating bus routes because funding has dried up. So, while essential services like education are seeing budgets slashed, Prop 29 would spend billions on new programs? It hardly makes sense.

Then there is this class warfare, anti-capitalist line of tosh:

Warner Todd Huston never tells his readers that Prop 29 will stop $804m leaving California’s economy for the pockets of the Tobacco Barons back east.

Amusingly, as these people are attacking me as a tool of “Big Tobacco” they’ve relied on a tool of Big Labor to use his Facebook page to smear me. One place these attacks on me are posted is the Facebook page of Los Angeles resident Michael W. Evans, a man whose name appears on nearly every left-wing petition for big-government programs and Big Labor efforts in the city! Evans is also a member of the extremist left-wing group Change.org, a George Soros-funded extravaganza. Expose that, American Cancer Society! Do you think your donors will be happy that you are in bed with George Soros, a man that has publicly claimed to be an activist against the United States of America?

After all this, I am a bit surprised that they didn’t wish cancer on me just so I know how it feels! Sheese.

But, call me duly “exposed.” Yes, I am writing about the boondoggle that is Prop 29, a new law that will impose a whole new tax burden on overtaxed Californians. Yep. That’s me. Ya got me. I am duly chastened.