Liberal Tactics: Just Lie, No One Will Check! 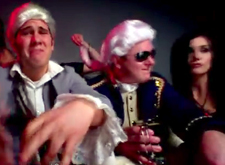 I have to say, at this point I am convinced that no one on the left really hates racism. In fact, they love it as it is their most important tool with which to control gullible voters. Cry racism and their mind-numbed acolytes dutifully echo the charge whether it is true or not — and it’s usually not. Well, they’ve done it again, cast the race card at conservatives. But this time they fell into a trap laid for them purposefully, set in order to prove their hatemongering, stupidity, cynicism, and lies.

At the Conservative Political Action Conference (CPAC) last weekend a humorous video debuted during the TheTeaParty.net blogger awards hosted by John Hawkins of RightWingNews.com. It was a rap video created by comedian Steven Crowder and his pal Chris Loesch. They called themselves the “Powdered Zombies” and the song was meant to highlight the wrong turn this country has made and how we’ve drifted away from the founder’s ideas.

One line of the song was an obvious satire on the left’s constant cries of racism. Remembering that these rap singers were evoking the founders, the line in question goes: “But I’m back from the dead now bringing back all my knickers.” The next line confirms what the reference meant: “I’m just talking about my short pants.”

Knickers, of course, were the short pants that ended at the knee, pants that everyone knows were the stereotypical male fashion statement of the founder’s era.

Naturally the geniuses on the extreme left were unable to understand the difference between the word “knickers” and, well, the “N” word. Two of the left’s leading (low) lights on the Internet, Gawker.com and Wonkette both made the quip somehow into a clear example of conservatives being raaacist.

Wankette claimed that a black man in the room was so disgusted by the racism that he “walked out” and Gawker claimed that “they use the N word” in the video. Neither is true. How do I know? I was there! You can see the top of my gray fedora (A Stetson Whippet from the 1940s, by the way) at about 1:40 into the video. I was sitting behind the guy in the green shirt holding up the cell phone who appears often at the left lower corner of the screen and right in front of the person making the video.

The fact is there was no racism in this song. Zip, zero, nada.

But Crowder, comedian that he is, knew exactly what he was doing. In a piece defending his song posted at HuffingtonPost.com, Crowder informs us why he put the quip in the song.

The verse was used to point out the hyper-PC, disingenuous liberals who today seek for a reason to be offended under every rock.

Crowder knew ahead of time that the left would lose its tiny collective little mind at their hoped for example of “racism” at the conservative gathering. He knew that once they felt they saw raaacism they’d leap at it without bothering to check to see if it really was what they thought it was. Too good to check, if you will. And they did. Crowder got them, but good.

The left gave Crowder his soapbox. “Listen, I’m not somebody who really cares about polarization, political correctness or even what context can be fit into proper 40-character formatting,” he says in his HuffPo piece. “People can hold any opinion that they want on any subject that they choose. Just don’t proactively lie to people. It’s a simple request really, and one that we don’t hear nearly enough.”

Yep. He got ’em good on their knee-jerk reactions built entirely on lies. Crowder proved that leftists don’t see truth. They see what they want to see in order to “prove” their preconceived notions. The world really is flat in their experience. After all, they fall off the edge nearly every day!

Oh, and one other thing. That curly-headed woman waving her arms over her head that both Gawker and Wankette use as proof of the raaacism and hate for minorities evinced by those evil conservatives? Yeah. Her name is Cynthia Yockey. She calls her blog A Newly Conservative Lesbian, Cynthia Yockey. Right. Next I’m sure Wankette and Gawker will decide that this lesbian is not a real lesbian, eh?

Yeah, lookin’ at the country, It’s not what I intended
Gotta start to make a change, Before you’re a Neverending
Story of a failed nation run straight out of luck
Like a million Tyler Perry Movies
Uh, you suck

All you little haves lots you’re still selfish and want more
Votin’ in your own self- interests now instead of the core
Principles that made this country both honest and true
Free to speak, worship, pursuit of your happiness too

With all this money afly you gon’ be needin’ a big freeze
I hate the size of the fed like Jesus hated the fig tree
As the spending goes up, you gotta borrow some more
Borrowin’ from the chinese, Oh My lord

Instead you just tax more, increasin’ the size
Of the federal government yeah to George’s surprise
You’ll be done like Detroit man, no You ain’t comin’ back
Forget it, I’m out, I’m muzzle loading my gat

I got tired of rolling over in my grave everyday
Makin a monarchy of my beloved US of A
You little glitches need remindin of what we were before
And the sitch that lead us up to revolutionary war
High taxes to the throne without a voice of our own
Ruled top down from the crown we wanted left alone
All y’all so soft you takin it year after year
We were fighting red coats while we were brewing our beer
Now I’m spittin cyphers through a grill made of wood
That’s how it all went down in G Dubs neighborhood
Packin cap n balls black powder hammers were cocked locked
Click clack, the lobster backs lost the attack ’cause I rocked!
So chicken littles who don’t know me listen don’t let it twist
We kicked the “Aaa’s” of the “Bees” for much less than this!
So don’t deny the historical, I’m climbing out of the mud
Follow me, believe this creed, plant the seed and be free!

Unemployment’s at eight five, when it’s really at twelve
Hear me class is in session you Can’t be saved by the bell
What happens when you, keep printing mo dough
Both party’s have gone green like their name was Al Gore

Yeah but right now you’re high, ain’t you big hitter
But I’m back from the dead now bringing back all my knickers

Man you think I’d say that, what’s wrong with you
I’m just talking about my short pants that I rock with my shoes
But let’s get back to the first point I was trying to make
The degradation of our freedoms and our country at stake

The government’s getting grand, while private sector grows smaller
Pour one out for your homies, cuz here comes the cold water
Unemployment’s still rising, our debt’s growing still
The only change you’re gonna get, is being left with the bill