Ice Creamed: Ben and Jerry's Apologize for Their Racism 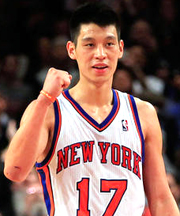 Jeremy Lin, the famed nouveau New York Knicks basketball icon, must be about tired of this foolishness at this point. Oh, I am not talking about racism being perpetrated against him, but the claims of almost racism that were accidentally, but not really, perpetrated against him. This time it is the lefty ice cream empire Ben and Jerry’s apologizing for their accidental, not really, sort-a-kinda, racism aimed at Mr. Linsanity himself.

This handwringing over ersatz racism began when an idiot headline editor at ESPN wrote his lamentable “Chick In The Armor” headline after a game where Jeremy Lin, he of Asian heritage, did poorly. The writer got fired for his “racist” comment.

Then came the sort of surreal “journalism guide” published by the Asian American Journalists Association (who’d have thought there was such a thing?).

There we learned that we aren’t allowed to say anything that might be considered remotely Asian. No “chinks,” nor “yellows” nor talk of fortune cookies allowed. And you thought we lived in a nation of free speech, eh?

Well, now the lefties over at Ben and Jerry’s Ice Cream company — long known for their extremist, left-wing causes, proclamations, even left-wing ice cream flavors — has been caught up in the mire of charges of raaaaacism.

How, you might ask? Because they had shards of fortune cookies in their Lin-Sanity flavor, that’s why.

Apparently the locally made flavor that appeared at a store near Harvard University, the school from which Lin hails, contained pieces of the offensive cookie and the Ben and Jerry’s shop decided they were being raaaacist with their frozen delight.

“We offer a heartfelt apology if anyone was offended by our handmade Lin-Sanity flavor,” the store said. “We are proud and honored to have Jeremy Lin hail from one of our fine, local universities and we are huge sports fans. Our intention was to create a flavor to honor Jeremy Lin’s accomplishments and his meteoric rise in the NBA, and recognize that he was a local Harvard graduate.

So, out with the racist cookie and in with a hunk of waffle cone… because, well, Jeremy Lin is so well known for waffle cones… right?

Come on, people. This is getting to the level of farce, here. There is absolutely nothing inherently racist about having bits of a fortune cookie in an ice cream concoction meant to celebrate an Asian person! Get a grip, people.

What, should the ice cream have had hunks of lutefisk in it?

Still, I guess replacing the fortune cookie piece with a piece of waffel cone is appropriate considering the absurd waffling this Ben and Jerry’s store has done.