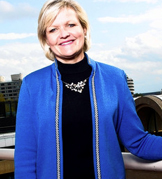 Without question Tea Partiers are unhappy with the elites of Washington D.C. Yet Cleta Mitchell is one Washingtonian that has became a welcome addition to the campaigns of some high profile Tea Party candidates.

Mrs. Mitchell, you see, is the in-demand, bulldog election law attorney that many Tea Party candidates go to when things began to get heated as they did during the 2010 elections.

Mitchell’s latest high profile client is Florida legislator Adam Hasner who is expected to run for the Senate in 2012. The conservative Hasner is a close associate of newly minted Senator Marco Rubio. Between 2007 and 2010 Hasner served as Rubio’s deputy majority leader in the Florida House.

With such high profile clientele, it is no wonder that Mitchell is called the “Republican super lawyer.”

The media has also made use of Mitchell’s expertise on America’s complex election laws. She has done battle with the left not just in courtrooms, boardrooms, and law offices, but also on Fox News, CNN, on talk radio, and in the print media. And it is no wonder the media likes her. Mitchell does not shy from bold statements.

For instance, after the Supreme Court reversed a portion of the McCain-Feingold campaign finance law in the Citizens United case, Mitchell told the Washington Post that the decision was the right one. Mitchell wondered why the Democrats were “afraid” of voices saying how left-wing forces would “destroy or permanently damage America’s free enterprise system.”

Mitchell also caused heartburn on the left with her denunciation of CREW (Citizens for Responsibility and Ethics in Washington), a supposedly non-partisan government watchdog group. During the Christine O’Donnell race in Delaware, Mitchell told the Christian Science Monitor that CREW was a “left-wing front group” financed by lefty billionaire George Soros.

“If [CREW director] Melanie Sloan wants to deny that, you tell Melanie Sloan to reveal her donors. She is not a neutral arbiter of ethics,” Mitchell said.

Mitchell was also a dissenting voice in the recent controversy over the American Conservative Union’s decision to allow the Republican homosexual group GOProud to be a sponsoring organization for the 2011 CPAC event.

Of course the hectic pace of Washington D.C. is a far cry from her upbringing in Oklahoma City, Oklahoma. Mitchell did most of her schooling in The Sooner State earning both a BA degree (in 1973) and a JD degree (in 1975) from the University of Oklahoma. She also was a Fellow at Harvard (1981) after which there has been no holding this ambitious woman back.

As a Partner in the powerful Washington law firm of Foley & Lardner, Mrs. Mitchell practices law before the Federal Election Commission, the Ethics Committee of the U.S. House, and many state and local agencies. She also authored one of the definitive books to guide lobbyists, titled The Lobbying Compliance Handbook (Columbia Books, 2008).

She is a member of, a board member of, or an associate with many of conservatism’s most famous organizations. Mitchell is active in the National Rifle Association, the Republican National Lawyers Association, Americans for a Republican Majority, American Conservative Union and was even a member of the Oklahoma House of Representatives from 1976 to 1984.

Recently I gained an interview with the Republican super lawyer. We discussed everything from the “glass ceiling” that women face, to the coming 2012 election, to the controversies at this year’s CPAC.

“I’ve been interested in politics my whole life,” Mitchell told me. I asked if that interest was enough to get her where she is without confronting some elements of the glass ceiling that everyone talks about.

“I didn’t become my class president at the University of Oklahoma because I was a girl,” she joked. But Mitchell insists that it wasn’t so hard for her because the glass ceiling had been broken long before she came on the scene.

“I came of age in a time when it was not so unusual to have women in politics and education and I’ve found that the issues that face women are not so different than those that face men. The glass ceiling was broken thirty years ago and people that don’t think that are wallowing in the past. The feminist movement served a useful purpose — like the labor unions — but now they’re just desperate to find some usefulness for themselves. Like the baseball player’s association, they’re not needed anymore.”

Mitchell told me that what brought her to Washington initially was a 1995 campaign to make federal term limits the law of the land, a case she eventually took to the Supreme Court of the United States. Even though she lost her case her expertise in election law led her from one candidate to the next until she became the go-to expert on the subject.

Mitchell feels that what makes her such ideal council for candidates is that she was once a legislator herself. She knows where her clients are coming from. “You don’t have the luxury of saying ‘maybe’ like so many lawyers do. As a candidate they need answers now. I listen carefully and I can help them get that accomplished.”

But even though she is the queen of campaign finance law, for the sake of the country she’d still get rid of the whole thing. “I’d get rid of the whole campaign finance system that we have. It’s an anachronism. There are a whole lot of things from the 70s that we are still suffering from. Like the EPA, the department of Education, the 70s were not good to the Constitution.”

“The campaign finance regulatory system that was enacted — and has been adopted in many, many states — was adopted in a time when there was only three networks, no cable TV, no Internet, no satellite, no talk radio, when the means of communication was extremely limited. It is insanity that we are governed by laws that were enacted forty years ago. I would get rid of the Mother-may-I system of asking the government what we are allowed to do.”

Mitchell also said that the recent Citizens United case that has driven the left to near lunacy was the right decision. “It really returned precedent that had been established more than fifty years earlier in which corporations have First Amendment rights.”

“What about free expression in political speech,” Mitchell rhetorically asked. “The First Amendment wasn’t meant to protect crucifixes in urine,” she said. “It was really to protect political speech from intrusion by the government. There is an unfortunate failure of understanding a lot of our history.”

I asked Mitchell about the coming 2012 race for the White House, but she shied from answering because some of the candidates to be have already contacted her. Still she lamented that things were starting earlier and earlier because it is “so hard to get on the ballot” in many parts of the country. In fact she was contacted by her first 2012 client only days after the 2010 elections ended.

On down ticket races, Mitchell told me that she is already representing current Nebraska Attorney General Jon Burning who intends to run for Senate against Ben Nelson and the previously mentioned Adam Hasner. Mitchell also hinted that Ken Blackwell might be running for something in Ohio.

Concerning this year’s CPAC it was clear the GOProud issue still rankled Mitchell and as far as she is concerned it is far from settled.

I reminded Mitchell that former Vice President Dick Cheney and Secretary of Defense Donald Rumsfeld were met with a smattering of boos when they mounted the CPAC stage this year. “It was unacceptable,” she said.

“I think [the ACU’s Al Cardenas] is right, there has to be some standards and the same thing is true for an organization like GOProud which has attacked Jim DeMint, attacked the Heritage Foundation, attacked me — I think we have to be cognizant of the fact that you don’t get a pass when you are a member of this conservative movement. We need to all be respectful.”

I asked Mitchell if she was satisfied with the final outcome of GOProud’s status at CPAC. “No not at all,” she replied quickly. “It’s not final in my view.”

“We should not be sending the message to the social conservatives in our movement that they aren’t welcome. It’s inappropriate. We need to do more to encourage all aspects of our movement.”

This brings up a pertinent question. I asked Mitchell why GOProud shouldn’t be considered, like the social cons, a part of that very movement Mitchell wants to protect?

“Well they aren’t committed to the fundamental principles of the movement,” Mitchell flatly stated. “It would be like ‘conservatives for gun control,’ it’s an oxymoron” to have gay conservatives, she insisted.

Finally, I asked how Mitchell wants to be known. “I just always say that I am the consigliare to the vast right-wing conspiracy,” she joked. “I like to help conservatives make their voices heard, their presence felt and their views known. Hopefully I can assist others to help further our founding principles.”

Mitchell is certainly a straight forward, powerful woman who is unafraid to come right out with her opinion. With her hard charging ways it’s no wonder that she is a most sought after lawyer for some of America’s best political candidates. Cleta Mitchell is truly the Republican super lawyer.