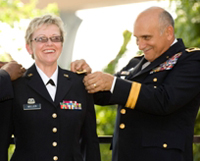 In August of 2011, Brigadier General Charlotte L. Miller, California’s first Army female general, was “involuntarily separated” from the California National Guard for what she feels are invalid reasons. In fact, when the order originally came down there weren’t much by way of reasons even given. At last Miller is speaking out and making some pretty serious charges against Major General David Baldwin, the man that fired her, by testifying before the California State Senate Rules Committee against his nomination to head the Calif. National Guard.

Last June, Miller was informed by The Adjutant General’s office (TAG) that she was being removed from her position and cast out of the California National Guard after over 30 years service and a near spotless record. What made matters worse was that, according to Miller, the TAG cited no authority or statute that authorized her removal nor was any proof of the specific charges made offered.

Miller further notes that her own due process was violated by the sudden dismissal and she says several military statutes were violated in the separation. Miller also reports that she has never been allowed access to copies of any investigations or findings that the TAG claims it based her dismissal upon.

A story in the Sacramento Bee from Feb 14makes all sorts of accusations against General Miller and states that Gen. Baldwin fired her because he “lost confidence” in her. But it seems that many of the accusations contained in the Bee article are incorrect, misleading or flat out untrue.

For instance, the Bee article says that Miller failed to detect crimes while commander of the Recruiting and Retention Command and left the impression that she was the officer that created and implemented a policy called “RIP-O” (Recruiting Incentive Program-Officers) saying that malfeasance was “echoed in her own policy.” The RIP program was not one upon which she had oversight as it was a federally mandated incentive program. She left command for another assignment within six months of the mandate.

Miller also claims she never had any notice that any investigations and findings of fault were made against her during the 2006 program in question.

Baldwin himself has a chequered career. He was allegedly involved in a cover up of the loss of several automatic weapons that ended up being recovered by the Bureau of Alcohol Tobacco and Firearms, members of his office were discovered altering their timecards in order to hide any “double-dipping” they might have engaged in, and it appears that he’s used state military funds to create new positions for his close associates creating an atmosphere of a crony military.

Gen. Miller says that Gen. Baldwin has violated due process on removals and subsequent promotions and that he’s created an air of favoritism that could paralyze the Calif. National Guard’s command structure. The act of favoritism, Miller says, “is one of the quickest methods to erode confidence in leadership by subordinates.” Cronyism of this type “compromises the strength and integrity of the Guard leadership.”

Miller will appear before the committee this Wednesday.