If you want to see a perfect example of how the left-wing media plans to smear and destroy Mitt Romney should he win the GOP nomination, no better example can be found than the hoax over a photo that lefties every where are trying to sell as evidence of Romney’s “privileged” life. Lefties say the photo in question shows Romney “getting his shoes shined” before getting on a private jet during his campaign travel. That is not what the photo shows, of course, but let’s not let the truth get in the way of a good left-wing mudslinging, OK? 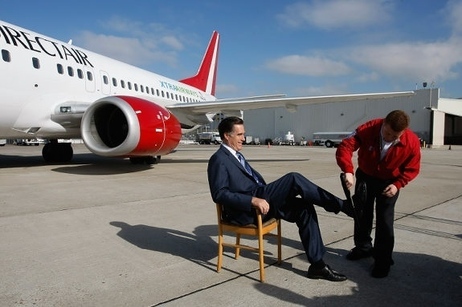 The meme began from a photo by Getty showing Romney sitting in a chair on the tarmac with his foot up and a red-jacketed worker attending to the candidate’s footwear. The left immediately assumed that Romney was getting his shoes shined before getting on a “corporate” jet. This story was made up out of whole cloth because in reality what the picture shows is Romney getting his shoes wanded by an explosive sniffing device wielded by a TSA agent before being allowed to board the plane.

The photo seems to have appeared early on the blog of the MSNBC smear show The Ed Schultz Show with the headline, “Romney Creates Another Job.” The caption set the tone for the left-wing onslaught to come saying, “Mitt Romney created another job with his presence alone… a job giving shoe shines on the tarmac in front of a corporate jet.”

From there Salon’s most virulent hater, Joan Walsh, picked up on the meme on her Blog with one titled, “Mr. 1 Percent is clueless about inequality,” where she used the photo as an illustration to “prove” that Romney was out of touch with the reg’lar folks.

Salon’s Steve Kornacki then went on MSNBC’s Rachel Maddow show and launched into his interpretation of the supposed shoe shining.

“There’s a picture that’s making the rounds today — the shoe shine on the tarmac,” Kornacki explained. “I don’t know if you saw this one. I don’t know where this came from… He’s sitting in front of an airplane. I think it might be a corporate jet, and he’s wearing a suit and he’s getting a shoe shine. He’s got a big smile on his face.”

…“He’s getting a shoe shine! We put this on Salon earlier today. I’m not sure where it originated. But it never looks good for a politician to be getting a shoe shine, you know, on a tarmac but it looks terrible when it’s Mitt Romney and this is your image and background. It looks worse when it’s the year 2012 and the economy is in such a bad place, and the Democrats are going to be going after your party for being the one that sort of favors the people who get shoe shines on tarmacs!” he added.

So, not only did Kornacki lie about the photo — he had no knowledge at all about what it really showed — but he then throw in the “I think it might be a corporate jet” on top of it — again without knowing if it really was or not — so that he could add more layers of lies to the story.

To its credit, NPR soon knocked down this false story informing its audience that the picture didn’t show any shoe shining at all.

As Tommy Christopher noted, even after it became known that the photo did not depict Romney’s shoe shining, Salon used the false narrative anyway in another story the next day.

False as it is, the whole meme is being picked up by every left-wing site out there. Huffington Post even has a self-proclaimed comedy writer offering 12 Captions for Mitt Romney Getting a Shoeshine at the Airport
.”

As I said, the truth doesn’t matter to the left. Not at all.