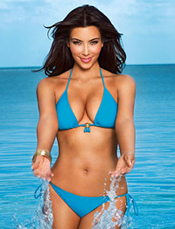 Here’s a new way to try and hip-up the boring, ages-old, left-wing idea of tax hikes: link it to reality TV star Kim Kardashian. That is just what ABC News tried to do on the Wednesday, January 4 edition of ABC World News Tonight when the venerable news program helped advertise an effort by a small group headed by a former Democrat operative that wants to hike California’s income taxes. It is a two-pronged approach of hitching a big government, big spending, high tax agenda to the TV reality show star in order to drag younger people into the left’s class warfare game.

ABC highlighted a California Millionaires Tax policy recommendation from a group called Courage Campaign. The group is headed by Rick Jacobs who is the former head of Howard Dean’s 2004 presidential campaign in California, a Huffington Post writer, and leader of this admittedly “progressive” group.

ABC reported that the “liberal group” (and kudos to ABC for actually identifying them as a liberal group for a change) is upset that Kim Kardashian, who made some $12 million in 2011, only paid one percent more than the average middle class wage in the Golden State.

Here is what the extremist high-tax group says on it’s website about this:

Kim Kardashian made more than $12 million in 2010, but she only paid 1% more in taxes than a middle-class Californian. That’s not OK, especially when budget cuts are decimating schools and critical programs for children, the elderly, and the disabled. It’s exactly why Courage Campaign and two dozen other organizations are putting the Millionaires Tax of 2012 on the ballot.

Wow, that tiny, little one percent suuuure seems small, right? But let’s look at the actual payment, shall we? Kardashian paid a tax rate of 10.3 percent and 10.3 percent of twelve million is $1,236,000! And those middle-class folks that paid one percent less at 9.3 percent? Well if the average income in California is $47.000, then they paid only $4,371. Why aren’t these middle-class louts paying their fair share? (That’s called sarcasm, by the way.)

Now, it’s not that I care at all for Kim and her brood — I never watch so-called reality TV and have never seen her show — but this is all really just class warfare. After all, let’s look at the tact here. Instead of actually talking about what Kardashian pays, this ABC flogged extremist group focuses on that “one percent” as if that makes her tax remittance tiny. They mislead the public by purposefully avoiding any mention of the amount she actually paid.

Seriously, the fact is we could out right confiscate the millions made by the Kardashinas of this country and it wouldn’t make a dent in the hole of trillions of dollars that Democrats have dug for us.

But there is one last thing to ask about this ABC report. I’m just wondering, but has ABC ever highlighted the tax policy idea of some small Tea Party group that made a video to sell its plan to the people? Why does this tiny, left-wing group in California rate any attention at all in a national news program?

Obviously the answer here is that ABC saw the possibility of exploiting Kardashian and enraging her young fan base in order to drive them to support a left-wing idea. It’s all about branding, you see. If the far left and ABC can leech off Kim Kardashian to sell their creaky old socialist policies, then that’s what they will do.