No, Daily Caller, Rush Will Not Back a Candidate in the Primary 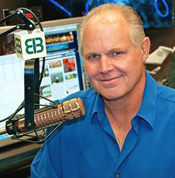 The Daily Caller posted an Op Ed calling on Rush Limbaugh to save the GOP by offering a clinching endorsement of one of the non-Romney candidates. The writer was full of reasons and praise for the most listened-to radio talker, but for all the importuning, Rush will never back a primary candidate. The truth is, there just isn’t anything in it for him.

The writer, Yates Walker, says that short of some action by Rush, Romney will be the GOP nominee. Romney’s big money and ubiquitous support among the ignoratti of the GOP elites will be too much for any candidate to overcome unless Rush plays the wild card, he says.

Walker fears that if Rush doesn’t speak, it will all be over.

If Rush doesn’t make a move, recent history will repeat itself. Romney’s multimillion-dollar ad buys and the mainstream media will destroy Rick Santorum before the end of January. Though he is an excellent conservative candidate and could beat Obama in 2012, Rick will be called “unelectable” by so many pundits over the next three weeks that it will become conventional wisdom. The conservative vote will split between Santorum, Gingrich, Perry and Huntsman. Ron Paul will take his customary 12-20%. And Romney’s quarter of the GOP vote will be good enough to win … unless Mr. Limbaugh decides to intervene.

Walker goes on to say that Rush has been “toying” with crushing Mitt for months and that Rush must be “chomping at the bit” to do so.

“On several levels, Rush wants to,” Walker writes. He says Rush wants “to stand up for conservatives and conservatism, to punish the GOP establishment, to avoid a McCain 2008 redux and to have fun. Good reasons, all.”

With all the gushing praise of Limbaugh one has a sneaking suspicion that Walker was as much making a bid to be mentioned on Rush’s well-listened to show as making a serious proposal.

Aside from Walker’s mistake of phraseology — *it is “champing at the bit,” not “chomping” — Walker assumes of Limbaugh far too much power. Walker also makes the mistake of not seeing that there is no upside for Rush backing a primary candidate. There are, though, plenty of downsides.

First of all we should note that Limbaugh’s reputation was not built on being a kingmaker. He’s never been that at all. So, picking a primary candidate this time ’round would be out of character.

That aside there really isn’t anything a primary pick would do for the big guy. Let’s put it this way, if Limbaugh butts into the primaries and picks a candidate that can’t ultimately beat Romney, then tongues will wag that Rush ha lost his influence. This would damage his reputation.

So what if Rush picks the non-Romney and he actually beats Mitt in the Primary? Then Rush will be on the hook to make sure that said candidate beats Obama. But if Obama wins, Rush instantly becomes the guy that destroyed both the GOP and the country by picking the candidate that couldn’t beat Obama.

The negatives to his career far outweigh the positives as far as Rush should be concerned. The perils to his career and his reputation are simply too great.

We do have a lower tier example of the dangers of picking a primary candidate in the person of another radio talker: Hugh Hewitt. Hewitt went out of his mind for Mitt in 2008. He backed him to the wall and lost all sense of objectivity in the doing. No Mitt misstep was too great or too small for Hewitt to vociferously deny its importance. Hewitt even wrote a book about Romney titled, “A Mormon in the White House.”

But in the final count Romney was crushed by John McCain and Hewitt became both a sellout and a schlub at the same time to many listeners. He ended up looking pretty foolish and this time around Hewitt is avoiding making any early picks. Hewitt proved that radio talkers put their reputations and careers in jeopardy if they back a candidate in the primaries.

*I have since heard from Mr. Walker and he said that he isn’t the one that made it “chomping.” He told me the editors at the Daily Caller altered it to “chomping.”