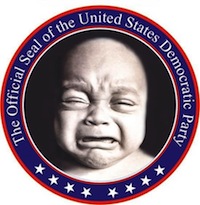 Once again Indiana Democrats are playing the fleebagger game. Because they don’t have enough votes in the Indiana Statehouse, Hoosier Democrats are abandoning their rightful duties and fleeing the Capitol over Indiana’s right-to-work bill currently under consideration in Indianapolis.

Indiana Senate Bill 269 and House Bill 1001 would make it illegal to require workers in Indiana to join a union as a condition of being allowed to have a job. Allowing workers a choice seems like an inherently American idea, doesn’t it?

After all, how could anyone tell you that you must belong to a union or you’re not allowed to have your job? That sort of forced association seems so contrary to the American character. But forcing people to join unions just so that they can have a job is precisely what Indiana Democrats are fighting to protect.

Now, Republicans control the Indiana Senate by a 37 to 13 margin and the House 60 to 40, so the Democrats don’t have the power to rule with impunity over their pet issues. So, instead of understanding that the bulk of the people voted for the GOP agenda and doing what they can with what they have, Indiana Democrats have decided to run away.

House Speaker Brian Bosma (R, Indianapolis) warned Democrats that if they don’t come back to do the jobs for which they were elected, they will be charged a $1,000-per-day fine.

Brian Simka of Media Trackers notes that Indy Dems are even trying a ploy that goes against Indiana law in a desperate attempt to beat back the new rules that would allow workers to choose if they want to join a union or not.

“On Tuesday,” Simka says, “[Democrats] said the reason for their afternoon walkout was to protest Republican opposition to an amendment they would offer to place right-to-work legislation to a statewide referendum vote.”

So, what’s the big deal with that? Well, Indiana has no “referendum” process. The only thing that comes close to a referendum that would go before the voters in Indiana is a constitutional amendment. No common legislation has ever been put before voters as a referendum in the Hoosier state.

“There is simply no constitutional provision requiring or even allowing a referendum to take place. Such extra-constitutional legislating does not appear to bother House Democrats who, led by Minority Leader Pat Bauer, have consistently resorted to walkouts as a means of blocking legislative business,” Simka said.

So Indiana Democrats are at it again, violating President Obama’s most cherished axiom: “I won.” In Indiana, Republicans won, just as Obama said he won and that win meant he should be allowed to do whatever he wants to do. But Democrats in Indiana aren’t taking a cue from their president because, once again, they are running away from their jobs, leaving their duties unattended, and refusing to stand for their principles in front of Hoosiers.