Illinois is drowning in debt and corruption. The state ranks as the worst state in nearly every category vying only with California for the worst-of rankings. The biggest factor in its downfall is the corrupt Democrat Party. So one would think that the state GOP could make good headway against this corruption. Unfortunately, the establishment GOP is in utter disarray. Worse, the establishment GOP fights to deep six any candidate from its own ranks that might offer reform and we have yet another story illustrating this fact in the 52nd District State Senate race in Champaign County.

The primary race in the 52nd is between the early announced John Bambenek(photo left), a long-time reform advocate, and establishment GOP candidate Alan Nudo, both of Champaign.

Bambenek is a well-known reform advocate and even wrote a book titled, “Illinois Deserves Better.”

For his part, Mr. Nudo, a 63-year-old Champaign County Board member, has in the past supported local tax hikes. He also was keen on securing stimulus spending for big government-style construction projects in his district.

But that isn’t all. Mr. Nudo has also had a hand in donating the single largest non-PAC donation to the incumbent Democrat Senator in the 52nd District!

It must be noted that Frerichs only beat GOP challenger Judith Meyers by a handful of votes in 2008, so if reputed Republican Nudo had donated that $5,000 to the Republican instead of to the Democrat, perhaps we’d already have a GOP incumbent in the 52nd District.

So, what is the deal here? Why is the establishment GOP putting up a tax-hiking, Democrat-supporting, big government-seeking moderate against a well-known reformer in a political climate where reform is exactly what voters want and the state needs?

Unfortunately, that is the state GOP in a nutshell. 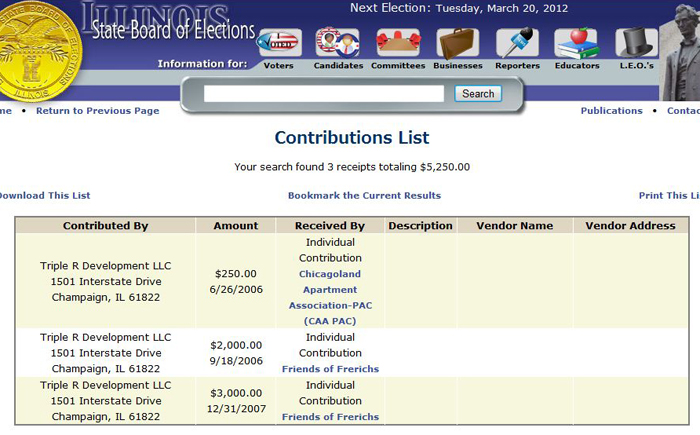