On Wednesday morning the Washington Post’s Aaron Blake posted an infographic that was a perfect example of how one can use a graphic chart to influence the public in subtle ways, ways that we of the center right better start employing in our own efforts if we want to win over the public.

Blake’s post, “Why People Hate Congress,” fits in well with President Obama’s class warfare rhetoric as employed in his campaign to set different economic classes against each other in a desperate and cynically populist bid to get reelected next year. There is little of substance to Blake’s post other than to fan the flames of the sort of hatred that he wants to see grow in order to aid Obama in 2012.

The Post’s Blake also ended up having to pull the graphic off his The Fix blog post because it simply did not illustrate what he claimed it did in his story — but that is another issue that we’ll deal with at the end of this report.

Blake begins his piece asking, “Want to know why Americans hate Congress?” He then goes on to claim it is in part because our elected representatives in Washington D.C. are members of the eeeevil rich.

The fact that members of Congress are getting richer (and 57 members come from the top 1 percent, according to USA Today) confirms what Americans suspect about the people who are running this country: that they don’t empathize with normal people.

Of course, with a dispassionate application of logic, having a few dollars more than the next guy does not ipso facto make the richer guy so out of touch that he cannot empathize with anyone in a lower salary range. Only those filled with hate make this assumption. Empathy has nothing to do with class, money, or politics. It has to do with one’s character.

Further there are plenty of members of Congress with the character to understand and have empathy with others. Then there are some that don’t. People are people, rich or poor.

It is also telling that even Blake admits that Congress has always been filled with “the rich.” The founders were not groveling in poverty, after all. It often takes a person that has achieved a certain place in society to become elected. I mean, should they be elected, how can anyone expect “the poor” or even the lower middle class to afford to fund homes both in D.C. and back in their district? Who can afford to leave their family and business if half the year off more to fly off the D.C. to attend to government business? And with the costs of elections and the Byzantine election laws these days causing many candidates to self fund, it will only be natural that “the rich” end up being our representatives in Congress. 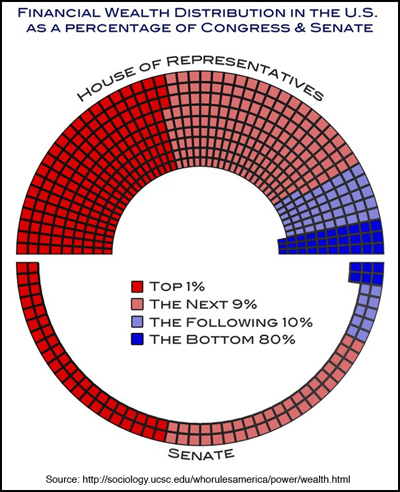 But special attention has to be paid to the graphic Blake used to illustrate his story. And what a masterwork of subtlety it is. Blake claimed that the illustration made by a well-known hate-the-rich researcher from California showed in graphic form the distribution of wealth among both chambers of Congress. The graphic depicts the “top 1%” and the “next 9%” in the color red. Then it uses blue to show the “following 10%” and the “bottom 80%.” Notice what is going on? That’s right, this graphic uses the color red to depict the eeevil rich. And what is the color red in politics these days? None other than the color the Old Media has assigned to the Republican Party.

This graphic is a great illustration of the way the left influences the emotions of the viewer toward their positions. George Scoville puts it perfectly in his post about this graphic.

If you don’t make your living thinking strategically about political communications, this might not have jumped out at you. But this is a very clever and very deceptive messaging tactic. If Democrats… are going to use this type of tactic, then Republicans and pro-liberty advocacy organizations need to take a page from this playbook quickly. We certainly can’t rely on the media to apply the kind of scrutiny that pulls back the curtain for casual political observers.

Exactly right. We on the right don’t think of this type of messaging often enough.

Then there is the rest of this story. In truth, the graphic that Blake claimed illustrated the riches of Congress directly, in fact did not. It actually meant to illustrate the wealth distribution of all Americans as a percentage of Congress.

A little later on Wednesday morning, Aaron Blake removed the graphic and issued this mea culpa:

This post initially used a chart that included data that we and others misunderstood. It did not reflect the wealth of Congress, but instead the wealth of the country, described according to numbers of seats in Congress. The Fix regrets the error.

Ooops. I guess the facts were “too good to check for the good folks at the Washington Post.”

But wait. Don’t get upset at Mr. Blake too quickly. After all, this graphic stirred the liberal heart. A quick glance makes viewers imagine that it is showing the number of eeevil Republicans compared to the nice, poor Democrats in Congress. In fact, that is precisely the emotion that the graphic is intended to evoke. So, we can fault Mr. Blake for not looking close enough at the graphic to discern its statistical facts, but we cannot fault him for having instantly grasped the subliminal message it was intended to relay. The fact is, the graphic woks beautifully.

These are the sort of tactics the left employs, folks. We’d best become hip to them fast.