On Monday morning a story whipped through the liberal blogosphere (and unfortunately one generally conservative news source) that had the left gleefully attacking the Tea Party Movement. They were thrilled, you see, to find a Tea Partier advocating for the assassination of President Obama and his entire family. Only they didn’t. Find such a Tea Partier, I mean.

Keith DeHavelle outlined this great example of how the left wing blogs glommed onto this story of an idiot that wrote on his Facebook page that Obama and his family should be assassinated and then assigned it to a “Tea Party darling” when in truth neither the nut in question nor any part of the story itself is connected in any way to a Tea Party group or Tea Party sentiment.

The story began when unsuccessful candidate for the Carson, California City Council, Jules Manson, decided it would be a great idea to post on his Facebook Page all about his hope that Obama and his family would be assassinated.

In an acute example of how erudite this Jules Manson is, he wrote, “Assassinate the f—ing n—er and his monkey children.”

I hope this ignoramus realizes he just committed a federal crime.

Anyway, it wasn’t long before this guy’s Facebook account was canceled and pulled off the web for its hate-speak. Rightly so, too.

But as the morning rolled on the left-wing blogs went nuts defining this guy variously as a “Tea Party Darling,” a libertarian supporter of Ron Paul, along with other labels. Unfortunately, they seemed to have a little trouble taking the time to find out about the real facts about this guy before posting.

The truth of what Manson “is,” however, is a bit different.

It turns out that Manson explained quite clearly on his own webpage that he does not identify with either of the two main national parties.

I am a mechanical engineer working usually within aerospace and defense industry. For a long time I switched between the two parties but found they were not representing the best interest of the general public. I believe honoring the constitution, a contract between the government and the governed, is key in a free democracy. I recently became a member of the Libertarian Party because they mirror many of my views. Such views include smaller government, less taxation, representation for the people, a free market system which allows small business to prosper, and individual liberties and rights. This means I am a constitutional conservative for reforms to return representation back to the public where it belongs. At the city level, such as Carson, this can be done by banning all campaign financing and requiring each candidate to fund their own campaign. This is key to restoring democracy. I believe this can and must be done.

There is also nothing on any of his various webpages and blog posts that identified him as a Tea Partier.

The best coverage of this seems to come from a left-winger bog called Angry Black Lady Chronicles. Left-wing or no, the poster there did a good job tracking down all the particulars of the story and comes to the proper conclusion that this nutcase, Manson, has no connection whatever with the Tea Party movement. As DeHavelle notes, Manson has statements showing him to be anti-Tea Party, even. Not only that but Manson was the editor of SupportAtheism.com. So, he’s not religious, either. This guy seems to be quite far from the Tea Party movement.

Sadly, what we see here are all sorts of bloggers and news sources leaping to a story, labeling a kook, but not taking the time to get down to the truth before hitting that post now button. We saw this when that criminal, mental case shot Gabrielle Giffords, as well. That shooter was labeled a Tea Partier even before anyone even knew his name. How one can claim they know a person’s entire history before they even know a name… well, that one was never explained to me.

While this particular bad actor’s name was known ahead of time, too many leapt to their keyboards to lay claims as to what he “was” and was not before any of them bothered to learn anything about him. That is bad form no matter who does it. 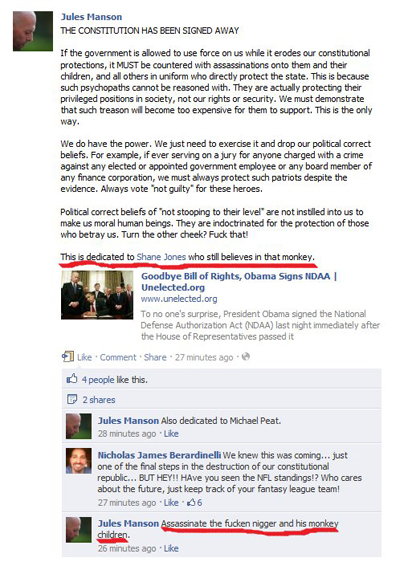