Looks Like Obama Lost These Boobs as Fans, Anyway 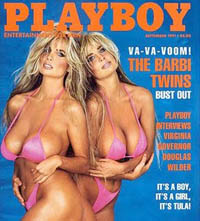 The Barbi Twins are no longer big fans of the Obammessiah. They think he’s turned his back on the horses. No, not the ones at the race track — well, maybe after they retire from the track they’ll fit in this story. No the Barbi twins think Obama has abandoned the horses that had until now been protected by a federal ban from being sent to U.S.-based horse slaughter houses.

Now, I did not choose to write about this story because it features two “hot” blondes with big boobs — though that doesn’t hurt. I’ve actually written about this horse meat issue before. Naturally I came down on the opposite side of the issue that the girls chose.

The two blond bobble heads are upset that Congress is repealing a ban on horse slaughter houses in the U.S. Absurdly, they seem to imagine that all horses in the country are “pets.” This is their theme to rail against the idea of having equine abattoirs operating inside the U.S.A.

Now, to millionaires that are out of touch with normal people, I guess horses might always be thought of as “pets.” But in the real world horses are often draft animals working on farms. And when they get sick or old and infirm or when owners can no longer afford to keep them they are properly — and humanely, I might add — destined for the slaughter house.

The twins and their fans are also upset that Obama came to office claiming that he would make the ban permanent. Now he’s signed the repeal of the ban. Another Obama broken promise, this one for the positive.

To start all this Barbi babbling, liberal idiocy struck a few years ago the feels-goodism causing the nitwits in Congress to intervene in a business that has existed almost since animals were put into service to mankind. And this foolish interference caused exactly the opposite conditions for American horses that animal-lovers thought they were creating.

Unintended consequences brought more misery and pain to horses in this country by the shuttering of the equine abattoirs, not less as animal-lovers thought would happen.

Horse meat trade is going on unabated in Canada and Mexico, so all we are doing is taking away jobs and economic activity by banning the slaughter houses, for one thing. But worse is that many horse owners with less money or less capability to deal with sick, old, or broken down horses are taking the poor animals to remote areas and just letting them go free where they die of starvation or are killed by coyotes and packs of wild dogs. Yeah, that is real humane of you, animal-rights nuts.

I’ll reiterate what I wrote in June: It seems that the end of horse slaughterhouses in America has not ended suffering for our equine citizens. In fact, there has been “unintended consequences” to these laws. Wouldn’t you know it, but the suffering of horses has actually increased instead of being alleviated.

The Government Accountability Office is now reporting that horses are suffering worse than ever due to the end of slaughterhouses here.

“Those horses are traveling farther to meet the same end in foreign slaughtering facilities where U.S. humane slaughtering protections do not apply,” GAO said in unusually blunt language that said that the horses are sometimes shipped in too-small containers for hundreds of miles, and that the inspection regime is too lax to help.

As Nebraska Republican Adrian Smith says, “ending horse processing has had a detrimental effect on both the economy and animal welfare. In light of this information, Congress should re-evaluate this misguided policy to allow responsible horse management which would create jobs, generate revenue and strengthen a struggling horse industry.”

The upshot is that congress killed American jobs, laid waste to an ages old industry, and caused more suffering to the very animals they thought they were helping. Typical. This story is an object lesson in the follies of do gooder government. This story just goes to show that when these lawmakers involving themselves in areas where they simply have neither any expertise nor display any common sense, they end up making matters worse in nearly every case. If this isn’t a perfect example of why our founders were right that that government which is a limited government is the best government.

Well, it looks like Congress finally addressed this issue and a reverse of the ban has come about. This is a good thing. Congress and these do gooder, animal “rights” wackos should be left out to pasture and out of our hair.