The Chevy Volt: Detroit's Hottest Car (Cuz They Catch on Fire and Stuff) 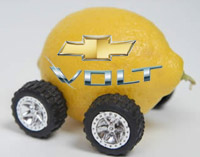 Government Motors has finally found its hottest car and the Chevy Volt is it. Unfortunately for Chevy, it isn’t because it is popular. It’s because the car seems to catch on fire a lot. Industry watchers are preparing for the Volt to undergo a recall to fix whatever problem the car’s lithium-ion battery pack has that seems to be causing the vehicles to spontaneously burst into flames.

Of course, this little catching on fire problem seems emblematic with everything about Government Motors. After President Barack “Lee IaJokka” Obama pumped $53 billion of our tax dollars into bailing out GM all we’ve gotten out of the deal so far is a stock tumble from $53 a share to under $25 (a $15 billion loss) and a badly selling “green” car that catches on fire every time you turn around. Such a deal.

As to the burning issue of the day, the Associated Press notes that an “investigation” has begun by the National Highway Traffic Safety Administration to determine why the cars are catching fire.

One Volt battery pack that was being closely monitored following a government crash test caught fire Thursday, the safety administration said in a statement. Another recently crash-tested battery emitted smoke and sparks, the statement said.

For its part, GM claims the cars are perfectly “safe.” Well, except for that whole catching on fire business, I suppose.

It shouldn’t be a big deal, though. It seems that only half a dozen people or so bought the thing anyway! The sales for the Volt have been dismal with only just over 5,000 units being sold during the first 11 months of the year. So the good news is that if there is a recall, GM can go to the individual home of every owner rather easily to inform them of the recall!

Friend Don Surber has the idea of the Chevy Volt just right, though. Calling the model the “electric Edsel,” Surber notes that the car nobody wants is a bad idea all the way around.

The Volt seems to be a farce of the highest order, Suber notes.

Spot on points, for sure. I’ll add one more to the list. It turns out the Chevy Volt gets the same number of hours on a charge that an electric car created in 1896 used to get! Now THAT is progress.

If you are interested in how much the bailout of GM is costing you, check out www.Bailoutcost.com.