Thanksgiving Story: Why There Are No Communist Pilgrims 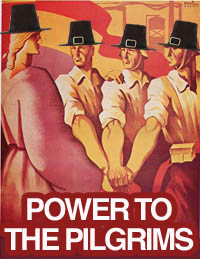 With as Euroized as Democrats and their supporters in our miseducation establishment have become these days, one shouldn’t be surprised to learn that one of the important lessons of Plymouth Colony — popularly known as the Pilgrims — is practically unknown in our schools today. We are all familiar with the bountiful Thanksgiving meal shared between the Pilgrims and the Indians, but less well known is how the Pilgrims turned away from their experiment in the communist-styled social policy upon which they built their fledgling, New World colony.

That’s right, the Pilgrims repudiated communism in 1623. No wonder the principles of communism never got a foothold here until recently when the Democrat Party began to shift away from American principles and toward the more socialistic ideas of Europe’s social democrats.

You see, when the emigres from England via Holland got to the New World and they established their new colony, Governor William Bradford and his fellow leaders decided to follow what they thought was the ideal Christian society. It was a version of the later communist ideal of “from each according to his ability to each according to his need.”

After only a few short years, though, Bradford and his cohorts began to realize that their socialist utopia was an utter failure. While the Pilgrims were barely getting by none of them were prospering, the colony was not growing and healthy. It was simply treading water. There were more busts than booms and at times they were on the edge of starvation.

…found to breed much confusion and discontente, and retard much imployment that would have been to their benefite and comforte. For the yong-men that were most able and fitte for labour and service did repine that they should spend their time and streingth to worke for other mens wives and children, with out any recompense. The strong, or man of parts, had no more in divission of victails and cloaths, than he that was weake and not able to doe a quarter the other could; this was thought injustice. The aged and graver men to be ranked and equalised in labours, and victuals, cloaths, etc., with the meaner and younger sorte, thought it some indignite and disrespect unto them. And for men’s wives to be commanded to doe service for other men, as dresing their meate, washing their cloaths, etc., they deemed it a kind of slavery, neither could many husbands well brooke it.

Imagine that, eh? The strong and industrious realized that their hard work brought them nothing more than those that did no work at all. Why work at all if just lounging about brought the same comfort and sustenance as hard work did? What’s the point of knocking oneself out with hard work?

Finally, Bradford and the other leaders realized that what we would call a capitalist approach to their society was necessary. So, they changed their rules and allowed that those that worked hard would benefit first and foremost from their own labor.

Once the pilgrims made this change to their society, they began to thrive. Bradford later reported on their success…

By this time harvest was come, and instead of famine, now God gave them plentie, and the face of things was changed, to the rejoysing of the harts of many, for which they blessed God. And in the effect of their perticular planting was well seene, for all had, one way and other, pretty well to bring the year aboute, and some of the abler sorte and more industrious had to spare, and sell to others, 50 as any generall wante of famine hath not been amongest them since to this day.

So there you have it. Communism was tried and found wanting several hundreds years ago and over two hundred years before Marx imagined in his arrogance that he had imagined the perfect system.

Happy Thanksgiving everyone, a truly American celebration in every way.