Ripping Off California at the Speed of High Speed Rail 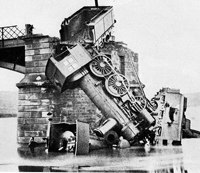 One of President Obama’s favorite go-to items to “stimulate” the economy is building new rail lines, especially high-speed rail. Many states have been smart enough to cancel the high-speed rail projects, but oh, not California. California’s project rolls inexorably onward. Still, California does help show the rest of the country why high-speed rail is a boondoggle that should be avoided.

The high-speed rail line that is being built between San Diego and San Francisco was initially sold to California voters as a $40 billion project with Prop 1A back in 2008. That’s a lot of cash, certainly, but its proponents said if it brings jobs to build it and improves the jobs situation in both cities after it’s built, it would be a good investment.

Prop 1A passed with just under 53% of the vote and was supposed to begin ferrying passengers by the year 2020. But now it has been found that the completion date and the $40 billion estimate both are, well, a bit off.

New estimates are proving the project to be a tad more expensive than originally thought. The newly minted California High-Speed Rail Authority (because we all need a new government “authority,” right?) announced recently that the price tag for the rail line will be more like $98.5 billion — instead of $40 billion — and will miss the 2020 deadline to begin transporting passengers by 13 years, because the grand opening won’t happen until the year 2033.

In just three short years this project has more than doubled in costs and added 13 years to its construction time. And why has the cost skyrocketed? Has real estate that has to be bought up for rail lines gone up in this flat market? Has the cost of labor somehow gone up in this stagnant economy? Or is it that the public was sold a bill of goods and wasn’t told all the facts when they were tasked with voting on this boondoggle in the first place?

This seems to be par for the course in California. Every year voters are asked to vote on some new big ticket item or another only to find waste, fraud, abuse, and when all is said and done they find a far more expensive final price tag than they were initially told it would be. Stem cell research programs, the First 5 program, this high-speed rail line, all have faced rising costs while not meeting expectations and in many cases have lacked sufficient oversight and accountability.

Yet every year special interest groups come hat-in-hand asking Californians to vote for even more bloated, unaccountable ballot measures. Recently, for instance, another such boondoggle was pushed onto the 2012 ballot. Called the California Cancer Research Act, it is just another new government bureaucracy that will feature millions in expenses, will add a $1 tax to a pack of cigarettes, and will be governed by six political appointees.

California has one of the worst budget deficits in the nation yet once again another needless bureaucracy has been created that will soak the taxpayers, drive up the cost of living for citizens, and more jobs will be shed in the Land of Milk and Honey.

California serves as the perfect warning away from the sort of meddling, left-wing policies that is destroying so many states. Let’s hope people are paying attention to the devastation liberal special interest groups have caused California.