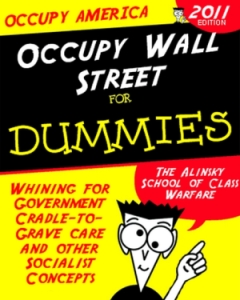 The anti-western, anti-capitalist group whose advertisement started the Occupy Wall Street movement has told its adherents to go home. The first phase of Occupy is over they said. Time to regroup, network, and try to finally come up with some sort of message besides an amorphous we-hate-whatever chant. Time to finally figure out an agenda to go on to the next step.

Only there isn’t one. OWS is now SOL.

It isn’t surprising. After all there was really never any there there. Sure there was some legitimate ire at its heart, but, quite unlike the Tea Party movement, there was never a scintilla of coherence to the Occupy… I hesitate to even call it a movement. To be a movement there has to be something moving.

The Occupy-Whatevers had trouble appealing to the average American from its inception. After all, nearly every major group sponsoring it — and those claiming partisanship with it — are the antitheses of Americana.

A look at just some of those that claimed a love for, expressed support for, or actually helped plan and execute the OWSers is a veritable who’s who of America-haters.

The list includes the Communist Party USA; the American Nazi Party; the Supreme Leader of Iran, Ayatollah Khamenei; the oppressive government of North Korea; racist Louis Farrakhan; racist from the other end David Duke; Dictator Hugo Chavez; The Black Panthers; Socialist Party USA; CAIR; Anonymous; the Marxist Student Union, not to mention every major member of Big Labor. With friends like this…, you know? There’s a lot more than these few unsavory friends of the OWS but these haters of the USA serve as a perfect example of why OWS never evolved into anything other than a mostly white group of angry young men filled with hatred for their own country and its system of government.

Additionally — and again very unlike the Tea Party — the OWSers were never able to field very many people at any given time. While the Tea Party turned out well over a million participants and commonly had thousands at its rallies (even close to a million at the Glen Beck rally, for instance) these OWS sit-ins never amounted to more than a hundred at a time if they were luck to get that many.

It is clear from the lack of growth, the fact that the events have so far just devolved into lawlessness, rapine, destruction, and pointlessness, and now just petering out, that this “movement” is the movement that never was.

I don’t just lambaste these OWSers because I have contempt for them — which I assuredly do — but because there has been nothing coming out of their efforts. It is impossible to take them seriously not because their ideas are necessarily risible — which they are — but because nothing consequential has come of it all.

On the other hand, OWS has been localized mostly to big cities, and big cities the left already controls. Very few OWS groups have formed “back home,” in the heartland. Further, no coherent agenda has come from any OWS group. No logical agenda built for action has emerged. These goofs are too busy with their “up twinkle” fingers to actually get anything done.

What is the outcome of this whole exercise in futility? A few desultory attempts to drive a narrative, a lot of property damage, a few women raped, a couple of deaths and little to nothing else. OWS is now ungracefully fading into history as the tantrum that did what most tantrums do. Produce much sound and fury but is ultimately ignored as a childish action by immature people.

So goodnight Occupy-Whatever. It wasn’t nice knowing you, but it’s great to see you go.

A couple of whiny Occupy cretins have emailed me all upset about the way I’ve characterized the dregs of humanity calling themselves Occupiers. Well, if you guys want to excuse rapists, drug addicts, and criminals prone to violence and property destruction I guess I can’t say much about that.

But there is a major difference between the way the sold-out, left-wing Old Media in America are reporting the Occupy-Whatevers and the foreign press. Here we get wonderful characterizations from the media telling us that these Occutards are just the salt of the earth. But, at least some media gets it. The foreign media is calling it like it sees it calling the Occucreeps the anti-capitalists that they really are.