Let the Children Vote? What Lunacy From Think Progress? 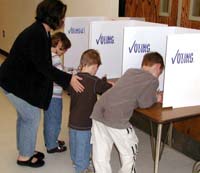 Matt Yglesias of Think Progress apparently feels it’s a good idea for kids to vote in U.S. elections. No, not just 18-year-old kids. All kids regardless of age. It is ideas impossible to take seriously like this that makes one wonder why liberals are ever listened to about anything by anyone.

I have to say, though, that it’s funny that Matt brought up this let-kids-vote idea because I was just talking about repealing the 26th Amendment and making the voting age start at 21 again. Funny we were both thinking about kids voting, eh?

Now, despite their undeserved reputation as peacemongers, liberals love a good fight. At least, they love to cause others to fight, anyway. They love to see the non-religious fight the religious, they love to see the relativists attacking patriots, but most especially they love to see the young hating their elders. They do all this by breaking people into balkanized enclaves where their politics of personal destruction can be most effective. And one of their chief weapons is to attempt to destroy social norms and substitute their own, cockeyed view of how things should be.

Certainly not every social norm is a great idea. But not every idea needs changing simply because there is “another way” to do things. The problem with liberals is that they have an absurd bias toward “new” loving it simply for the fact that it’s new. They begin all discussions with the base assumptions both of their own brilliance and their elder’s stupidity. There is no thought put into their positions but if it seems “new” to them, why, it must be better than that tired “old” idea.

This idea of kids voting is one of those exercises in logic-free thinking.

…ally Kohn writes about a campaign in Lowell, Massachusetts to let seventeen year-olds vote in local elections. More power to them, but I say let any American citizen vote in any American election he or she wants to.

Objections to this usually take the form of imagining a highly disciplined party of seven year-olds reliably delivering bloc votes to whichever candidate credibly promises endless kindergarten. If you think for five minutes about the practical problems of political organizing, and then for five minutes more about the practical problems of getting kids to do anything I think you’ll see quickly that this is a misguided worry. Realistically, voter turnout in the United States is not particularly high to begin with. Older teens and twentysomethings are already disproportionately unlikely to vote. If we extended the vote to more children, my guess is that relatively few of them would exercise it. But those who did would come from an unusually dedicated and informed sub-set of American teenagers. Meanwhile, if seven year-olds somehow do manage to organize themselves into an effective political lobby, I say more power to them.

I am not sure who Yglesias is talking to that thinks preventing kids from voting would stop a “highly disciplined party of seven year-olds” from hijacking an election, but that isn’t the form that objections to kids voting takes. The objections to kids voting is that they don’t have enough information in their heads — and absolutely cannot have — upon which to make an informed vote.

One of the oldest quotes about what we have here in our U.S. system is ascribed to Ben Franklin who was asked what the founders had given us as he was leaving the Constitutional Convention of 1787. He said it was a republic if we could keep it.

He said this meaning that we can only keep our system working properly if we, the people, keep ourselves informed about current events and then make an informed vote grounded in the principles upon which the founders had based our system. That takes maturity and a certain breadth of knowledge. This is something children are not mentally equipped to have gained. Not only does it take maturity to understand these concepts it takes time to have taken all that information in.

Few other quotes are as germane to this issue as that.

Additionally, Yglesias seems to imagine voter turnout should somehow be a deciding factor in why kids should or shouldn’t vote, too. He seems to think that because voter turnout is not all that high, kids voting wouldn’t be a big deal. This is just ridiculous. Should we be designing our system based on low turnout of the very voters that we need to shore up that system? That hardly makes sense.

Further, we should not be allowing an abomination to exist simply because only a few instances of it will take place! That would be like saying we should allow theft because most people don’t do it.

One of the things many of the founders thought about voting was that anyone who is not vested in the system would not cast an informed vote. This is why in the beginning only taxpayers of high station and landowners were given the right to vote. It was thought that if you didn’t have a stake in the system you’d be prone to voting for other’s benefit instead of your own.

In this light, kids are not vested in anything. They don’t have jobs, they pay no taxes, and few votes they’d make would have an impact on them directly. Why should we expect a logical, thought-out vote from someone that has neither the mental capacity nor any direct interest in that vote?

But Yglesias’ biggest mistake is this: “But those [children] who did [bother to vote] would come from an unusually dedicated and informed sub-set of American teenagers.”

What an absurd thing to say. Why does coming out to vote automatically mean said voters are “unusually dedicated and informed”? What if their school just gave them extra credit to go vote and they were instructed how to vote by some left-wing teacher somewhere? How is a fully programmed vote an informed one?

So I am sorry, Matt, but being “unusually dedicated” to go vote does not mean the voter is necessarily informed well enough about the issues and our system to make a logical, informed vote. Union members are “unusually dedicated” but usually they are only so dedicated because their union bosses told them to or they’ll lose favor with the union and, therefore, lose money or their job. That doesn’t mean the actual votes cast by union members are either informed or good for anyone but greedy union bosses!

The Democrats in the pre-civil war south were “unusually dedicated” to voting in order to keep slavery and the slavocracy in power. We know what a terrible idea that was, right?

Dedication or motivation to go vote does not ipso facto mean said vote is an informed or good vote. Period.

But, see, to Yglesias, because the idea of kids voting is new, why that makes it good and right.

This man’s total lack of logic is simply stunning. His little idea isn’t just an exercise in theorizing. He displays such a lack of critical thinking that he makes of himself a silly person. It seems to confirm that being part of “Think Progress” means that the “thinking” part is optional.