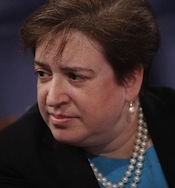 This past weekend the Washington Post published a hit piece on the grand opening of a museum in Georgia dedicated to the birthplace of U.S. Supreme Court Justice Clarence Thomas. The paper was desperate to make some grand conspiracy, some lawbreaking evil from the project. But whatever is going on with the museum, this story was just one more shot orchestrated by the left aimed at forcing Justice Thomas to recuse himself from the upcoming hearings on whether or not Obamacare is Constitutional. Of course, this is all a smoke screen to hide the fact that it is really left-wing darling Justice Elana Kagan that should recuse herself from the case.

The Post story was a mish mash of innuendo, guesswork, and partisan claims, all amounting to much of nothing for proof of wrong doing. The Post even took the opportunity to use the word “whitewashed” when describing the color of the building housing the museum commemorating Justice Thomas’ birthplace. None too subtle, that.

There was plenty of other coverage of the opening of the museum that was positive, of course. Still it is apparent that the left hates Justice Thomas so much that they can’t even stand it that a small commemoration of his place of birth be created.

But real facts weren’t on the agenda for this article on Thomas. This article was meant as yet another slap at Thomas in order to mount pressure against him for the upcoming case against Obamacare. The left has been floating the demand that Justice Thomas recuse himself because his wife has worked as a “conservative activist and lobbyist, where she specifically agitated for the repeal of ‘Obamacare.'”

Contrary to the left’s new attack on Thomas, in America we do not hold the work of a spouse against someone. If we did that, half the members of Congress would have to be removed for the boards, or agencies, or organizations that their spouses work for. The pertinent fact is, though, that Justice Thomas himself was not the one working for any group that advocated for or against Obamacare.

This, however, is not true of another member of the Supreme Court. Justice Elana Kagan was actually involved in advising how to defend against challenges to Obamacare. If that isn’t directly relevant, what is?

Last week it was discovered that when Obamacare passed, Kagan sent euphoric emails to Harvard Professor Laurence Tribe who was then serving in the Department of Justice. This in itself should be enough to show that Kagan’s opinion on Obamacare has already been decided easily brining into question her unbiased judgment on the case.

But that isn’t the only problem with Kagan’s serving as one of those that will have the final word on the constitutionality of Obamacare. She wasn’t simply elated that Obamacare passed. She was also part of the team that advised the Democrats on how to support Obamacare and keep it from being challenged.

You see, at the time, Kagan was Solicitor General at the time and was, “personally involved, even if only to a limited degree (though without a complete record, it’s difficult to know how limited), in advising how to defend against challenges to Obamacare.”

Yet, here we have the left attacking justice Thomas because his wife said she doesn’t like Obamacare and saying that is a basis to force him to recuse himself from the case while ignoring Kagan’s actual involvement in favor of Obamacare. Not too blatantly partisan, is it?

So, how is the Old Media reporting this story? A recent piece by Politico is a perfect example of how the left is minimizing the facts. The meme du jour is to report that there is, “No sign Elena Kagan, Clarence Thomas will recuse on health care law.”

Politico isn’t the only one. The Week did a similar piece juxtaposing calls for both Thomas and Kagan to step down as if the calls were equal in seriousness.

In other words, by linking the two calls for recusal as if they are coequal in import minimizes the call for either to recuse themselves. Readers will simply see the calls for recusal as a partisan maneuver and Kagan’s more legitimate reason for having to step back from the Obamacare case will more likely go unaddressed.

Further, the left also knows that the right is traditionally spineless in the face of criticism. They are banking on the fact that the right will cower — like it always does — and Thomas will remove himself from the case, even though there is no legitimate reason he should, while Kagan will never in a million years remove herself despite that there is good, legal reasons for her to do so. The left doesn’t care about propriety or legality when it comes to pushing its agenda, we all know.

The case for Kagan’s recusal, though, is quite serious, indeed. So serious that Eric Holder was called to testify before the Senate Judiciary Committee where he said that Kagan was not involved in Obamacare. Holder’s testimony is questionable, though. Recently Republican leaders in the Senate sent a letter to U.S. Attorney General Eric Holder expressing their belief that Holder’s testimony about Kagan’s involvement in past Obamacare policy making was “belied by the facts.” Holder’s office has been stonewalling calls by the Senate that he provide it with documents regarding Kagan’s involvement in the healthcare law.

Finally it is interesting to note that the Old Media knocked itself out to send reporter after reporter to Alaska to uncover dirt on 2008 GOP VP nominee Sarah Palin. Then the media wanted to uncover every single piece of dirt it could find. Yet in this case the Old Media is uninterested in discovering to what extent a sitting Justice of the Supreme Court had in a case that she will be tasked with adjudicating. Remember, a vice president has little real power, but the Old Media was losing its mind over Palin. On the other hand, a Supreme Court Judge has incredible power and the media are disinterested in finding out about this judge.

If this all doesn’t show the left-wing bias of the media, well, “you can’t handle the truth.”