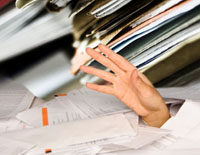 One of the reasons that our economic recovery has been so slow is that the Obama administration has opened a continuous avalanche of regulations affecting jobs, hampering businesses, and costing all of us billions in lost revenue, taxation, and waste. But there is a bill in the House called the REINS Act that could help tamp down this avalanche, save us all money, help bring back the creation of jobs that aren’t being created now.

The full name of the act is the Regulations from the Executive in Need of Scrutiny Act and that is a pretty straight forward name for the legislation as its premise is that regulatory agencies are so out of control and the costs they impose on the people have become so onerous that Congress has to step in and place limits on this untrammeled power. (H.R. 10 and the Senate’s similar bill S. 299)

The bill was introduced two years ago by Kentucky Representative Geoff Davis (R) who got the idea from a constituent who confronted the Representative on the costs of regulation. Davis’ bill would require an up or down vote by Congress and the President’s signature on all regulations that will cost Americans $100 million or more to implement.

For too long, Congress has delegated much of its constitutional authority to Executive Agencies. This has allowed Executive Branch agencies to implement rules that are sometimes ineffective, redundant, time consuming, costly, and even counterproductive. In addition, it has allowed previous Congresses to limit their accountability for such rules by front-loading the benefits of legislation and back-loading the costs.

The REINS Act would restore congressional responsibility and accountability in the regulatory process so that the elected representatives of the people can be held accountable. This will ensure that new major rules serve their intended purpose and do not place unnecessary burdens on the job-creating businesses that our economy needs to grow.

This is a good start for Congress to reassert its authority. Call your congressman and tell him to support the REINS Act now.

For more information, the Heritage Foundation has a webpage on the REINS Act.