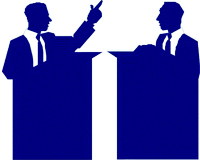 In the upcoming Republican primary I am not voting for Brian Williams, Brett Baier, Scott Pelly, Wolf Blitzer or any other member of the Old Media. I am trying to figure out which Republican nominee for president I might want to support. So why has every so-called debate featured mediots trying to prove to their mediots pals how tough they can be on Republican candidates instead of the Republican candidates actually debating each other?

Lately every one has been harkening back to those Lincoln-Douglass-styled debates of yesteryear and there is a reason that the famous debates between GOP Senate candidate Abe Lincoln and incumbent Democrat Stephen Douglass held over 150 years ago come so easily to mind. It’s because we aren’t getting that these days!

What we are getting instead are media personalities trying to make reputations for themselves instead of debates that tell us what the GOP candidates know, if they can articulate it, and if they can defend same.

I wish the candidates would stop going to these worthless excuses for debates forthwith. We need real debates and that means substance. The candidates should stop worrying that they might look “afraid” to debate and demand some format changes for any future outings before they show up again.

I am not saying we don’t need a moderator, of course. There should be one but his only job should be to keep the candidates on time, civil, and on topic. But he should ask no questions and should not interpose himself into the proceeding as if he were a participant. We don’t need to hear if the moderator thinks he’s as smart as the candidates.

Yes, instead of media personality showcases let’s have real debates. Single subject debates featuring all the candidates above 2% in the polls — meaning we don’t have to bother with Huntsman. Such debates would feature a single topic, such as foreign policy, economic policy, and the like. Each candidate would get 10 minutes to expound upon his vision of the topic at hand. Then that candidate would stand as the other candidates (not some mediots) questions him on his presentation.

In this format we’d see what candidate could present a coherent platform or series of policies. We’d see if that candidate could defend his ideas in the face of questions from his competitors. We’d get something else, too. We’d see if those competitors could listen to a presentation, think on their feet about it, and then offer critiques and ask questions upon that which they just heard.

Focusing on one topic per debate would allow Americans to take a fuller measure of their candidates and what they might want to do about these issues. The listeners and viewers could get a better feel for these candidates without getting distracted by a confusing series of topics that are unrelated and disparate.

But the best thing is that the media’s gotcha campaign would be left behind, a distraction that, as Newt Gingrich has been saying over and over again, has all too often overshadowed the candidates.