Did Ezra Klein Prove that Journalism Just Another Arm of the Democrat Party? 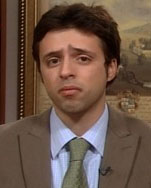 Fishbowl DC has a startling report that seriously brings into doubt the independence and veracity of the journalistic arts. It seems that the Washington Post’s Ezra Klein appeared as a speaker at a closed door session of a gathering of Senate Democrat Chiefs of Staff last week, a move that, as Betsy Rothstein correctly notes, “blurs the lines between being a journalist and trying to sway politics.”

No one knows what Klein briefed the Democrat staffers about, but the whole episode raises eyebrows. How is it that a purported journalist is the one doing the briefing instead of the one getting briefed? As Rothstein notes, it is all very untoward.

There is no other way to look at this but to see it as a journalist that is not being a “reporter” but a participant with an ideological motivation. Especially since this was an address given by Klein only to Democrats as opposed to a bipartisan gathering of Senate staffers.

This reflects badly on the entirety of journalism. There are already enough people out there that don’t trust journalists as far as they could throw them. This makes matters worse. The Washington Post really should cut their ties with this guy. He really brings suspicion upon everything they do.

It should be remembered that Ezra Klein was the founder and proprietor of the notorious “Journolist,” a secretive website message board upon which well known journalists colluded to push a liberal agenda while sounding out ways to attack conservatives. One again making the lie that journalists are strictly interested in reporting the facts.

Klein shut down the Journolist soon after the Daily Caller’s exposées of its existence.