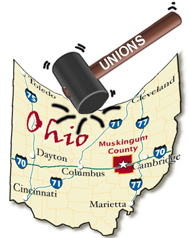 Matt Mayer of the Buckeye Institute has done the math on what a defeat of Issue 2 will cost Ohio’s taxpayers. Turns out it will cost taxpayers $1,468 more a year by 2015.

Mayer made a simple calculation by taking the $8 billion tax hike that a defeat of Issue 2 will usher in by 2015 and dividing that by the 5,448, 500 state tax returns filed in Ohio. He also took the initial $1.4 billion tax hike that will result if the unions win on Tuesday and found that each taxpayer will be stuck with an immediate $257 more in taxes next year.

The annual savings we calculated from SB5 once all contracts are negotiated would be nearly $1.4 billion per year (for details, see www.buckeyeinstitute.org/getthefacts).

An additional wrinkle is that Big Labor/Democrats have essentially gone all in on higher taxes; meaning, if SB5 is repealed, that removes one option to reducing local government costs, which leaves two options–program/staff cuts and/or raising taxes… For example, Ohio’s 613 school districts currently project a collective deficit by 2015 of [approximately $8 billion]…

So, Ohio, you have a choice. Vote Issue 2 down and stick yourself with needlessly higher taxes and give unions the ability to stick it to you further, or give your legislature — not union bosses — the power to control your state’s budget like they should.