An Example of Why Radio Host Michael Medved is No Conservative 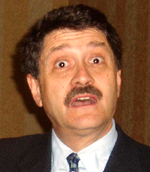 Michael Medved is touted as a “conservative” radio host from the Salem Radio Network. But just how conservative is he? One has to wonder with his constant dismissive attacks against any and every conservative politician. But this week he revealed another reason why he is less conservative than he pretends.

Medved started his political life working for the Kennedy’s in the 60s, so like many young people he started out as a liberal. But from his radio show yesterday it seems pretty plain that he never really turned the corner from a big government liberal to a true conservative. He obviously still has a ton of far left beliefs in the wondermentatudenousness that is government.

The subject of Obama’s tax on the Christian Christmas icon, the Christmas tree came up on his Tuesday radio program. Obama floated the idea that a 15 cents per tree federal tax should be put on Christmas trees this year to fund another bloated boondoggle government agency.

Michael Medved reveald his complete unconcern over this intrusion of the federal government on our Christian holiday. He argued on his radio show that this tax on Christmas trees is no big deal because it’s “only fifteen cents per tree.”

Of course a principled conservative would be against this idiotic tax even if it were but one penny per hundred trees!!

The amount of this tax is immaterial to the principle of the matter. The central problem here is that the money was going to go to fund a new federal program. THAT is what we should be standing against not the low rate of the tax.

As they say, there is nothing so permanent as a government program and this one would be just another government boondoggle that would grow and grow until it cost us billions a day like so many other useless government agencies.

Worse, how long would it be until this new unnecessary government agency would begin to ask for more money and more powers over Christmas with the faux justification that it is promoting it?

That Michael Medved doesn’t see this and isn’t concerned about birthing another wasteful government agency and giving this agency new controls over our lives, well it pretty much shows that he — admittedly once a liberal — never really did become a true conservative. With friends like Medved, who needs enemies?